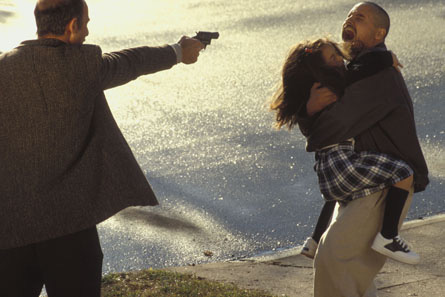 If this screen-shot causes you any emotional reactions other than mild to heavy laughter, you should seek mental medical attention immediately. You may have unwittingly picked up a knife already. Please avert your eyes from 'Crash' forever. You have a problem.

Dawg: What would your life have been like without Crash?

Kleven: I know it would have been far better, not just for me, but for a lot of other people - victims and families.

Dawg: If you could speak to those families right now, what would you say?

Kleven: I hope that those who I have caused so much grief, even if they don't believe my expression of sorrow, will believe what I'm saying now. There are those loose in their towns and communities, like me, whose dangerous impulses are being fueled, day in and day out, by over-valued mediocrity in the media in its various forms - particularly film. But on TV too.

Kleven: Network shows too. I never got to see how Lost ended, but a lot of people thought they were so hip for liking that show. But they don't realize that really stupid, uninteresting people liked it just as much as they did. I think that should always be a warning sign, if you notice that your 'edgy' show is one of the top-rated programs in the country. It's something I wish I'd known back in college.

Dawg: There is tremendous cynicism about you on the outside. I'm not sure there's anything you could say that people would believe, yet you told me that you have accepted that Crash winning Best Picture is one of the biggest jokes in Oscar history, that the movie is just wading-pool-shallow posturing trumped up as complex art by people who aren't actually into complex art, as a way for them to feel like they have serious taste. Do you draw strength from that now?

Dawg: And are you sorry?

Kleven: I am. I'd give anything to be able to bring all those women and girls I murdered back to life so they could be with their friends and families again.

Dawg: I meant are you sorry that you ever thought Crash was good.

Dawg: Then I forgive you.

Do you enjoy Worm Miller's signature brand of bullshit? What if we told you there was an entire book full of it?! Impress your friends by being the first member of your social circle to buy ten copies of Worm's new masterpiece!