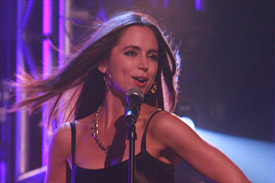 Is she swishing dramatically or is her hair blowing? Does it matter?Of course, just like with any hooker, things can't go according to plan. Sexually menacing men punching, stabbing, shooting, or attempting rape on a hooker are a common theme of Dollhouse.

This is very empowering for women, because nothing says feminism quite like a brainwashed fantasy prostitute being punched and kicked in the face by a john.

It's like how Jessica Alba used to go into heat because of all that cat DNA James Cameron wrote into her genes. Mrowr! But this cat has claws!


STEVE KENNELS is punching ECHO and trying to rape her all over. He is punching her and making rape moves at her.


I am going to commit acts of sexual violence against you.

Yo! Maybe it is you that should be raped.

Pretty good, for a girl. But I thought they would have imprinted you with some better moves than that.

What??? I'm confused by what you're saying about imprinting because I have never heard that term before now!

While Echo is being confused Steve Kennels punches her in the hooter area three times. They roll around on the ground and you can see part of Echo's butt crack. ZOOM in on the side of Echo's boob sticking out. She punches Steve Kennels and he drops a knife.

You should have raped me when you had the chance!
(Stabs Steve Kennels in the chest)

Steve Kennels dies. Echo starts crying and then has a flashback.

Unfortunately, Joss, no prophecy, shadow space government, or super hooker company will ever make a woman completely and exactly as awesome as your mom. However, I think if you bring me aboard we can work together and get pretty darn close.