I recently learned some amazing figures about breast cancer and prostate cancer funding (Warning: PDF) and here is just what I found, friends.

I'm relatively new to this phenomenon so I'm trying to figure out why. Any answers? So far I'm puzzled because you'd think with all these men making so much more money than women, the Feds might want to keep them alive a little longer to suck more taxes out of them.

Women already live longer than men due to the female privilege of not being expected to work dangerous jobs, die in pointless foreign wars, or not being so retarded that they get the idea to fill a cantaloupe with lighter fluid, light it on fire, and hit it with a baseball bat.

But every Fall, like clockwork, I see the breast cancer charities hit the streets soliciting for money. I even saw a pink ribbon on a copy of Madden 2009. How about kicking in some money for the ol' prostate (or sickle-cell anemia for that matter), guys? For once I'd like to see a woman "racing for the cure" with a picture of their dead husband's asshole printed on her shirt.

I don't know. If there's a legitimate reason for such a huge difference in funding, I'd like to hear it. For now, I'm putting this one in the maybe pile.

Poor Self-Image, It's a Problem We All Deal With 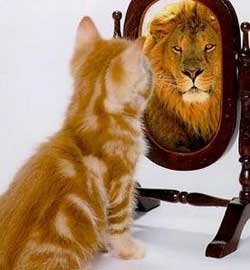 Fuck everyone, cat. Fuck everyone.I'm ugly. Every part of me is ugly. That's why I'm here and not on TV. In fact, I'm too ugly for radio. I've got acne scars and a terrible voice. On top of all that I act pretty goddamn gay.

In fact, all my hobbies are pretty gay. I like high speed trains, Disneyland, and The Howard Stern Show (to anyone who listens, we all know how gay the show has gotten). I like musicals, Xena (and not just for the tits), and teared up at the end of Titanic. I'm ostracized for these things, and with good cause. I'm a horrible monster and I pray for death. Because I'm unable to fit into the role the majority of society expects me to, a terrible depression has developed.

Now women want you to believe that whatever caused me to be so fucked up is somehow less important than the issues that cause women to end up so fucked up. Apparently there are models on TV that force little girls to wear makeup or play with Bratz dolls or something. Sorry there are beautiful people on TV. But hey, Roseanne. At least you got that...

The more I think about it the more I realize how similar our problems really are and wonder why we don't work together instead of acting so surprisingly antagonistic toward each other.

It's certainly difficult when women start their feminist rants with helpful instructions for men such as, "Don't make yourself look bigger than you are by stretching! It's just another way you oppress her!" or my favorite, "If you happen to be going to the same place as a woman, don't follow her. In fact, try to overtake her or cross the street, so as to not make her uneasy about your presence." Jesus, we anonymous men are guilty until proven innocent by women, no matter how many people they know and love rape them. How do we not react so strongly?

I admit, though, it's difficult to join sides when men are raping women by the bucketfull. We'll work on that.

In the end, I want the world to be as equal as it possibly can be. There are differences between men and women, but those differences don't make one side worse than the other. We got rid of that bullshit melting pot analogy for the United States and instituted the more PC salad bowl imagery. We can do it for gender too! Our differences are to be celebrated! For once I'd like to go over to your side and wear the underwear and I'd like you to come over to my side and work down in this here mine shaft.

Unfortunately there will always be shysters that mislead the public as to the extent of discrimination against women with bullshit statistics like wage gap and the ever popular "Here's how much a homemaker would make" articles that attract attention and most importantly, money, to their cause.

Why don't we unite together and fight the real privileged class, the true evildoers of the world, the Jews?

(USER WAS BANNED FOR THIS UPDATE)