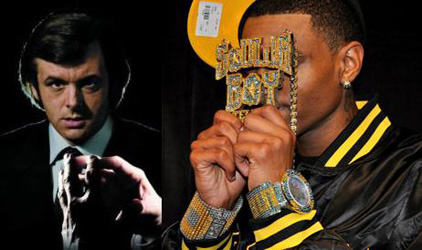 David Frost: Hello, good evening and welcome. Our guest tonight could be described as a rather slippery fish that swims in the not-untoxic waters of mainstream pop rap music. Please applaud Mr. Soulja Boy Tell 'Em.

Soulja Boy: Hey man, you fuck last night? Superman those hoes? Super-soak those tricks? Water-balloon that booty? Turn that firehose on the burning building to save the little kitty's life?

Frost: Ice-T, a pioneer in the rap genre, says that you "single-handedly killed hip-hop." How do you respond to this damning accusation? Have you murdered the music this man loves, causing listeners needless agony? 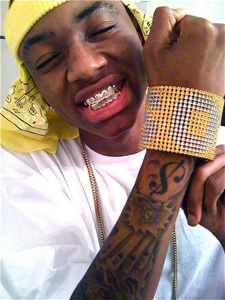 Soulja Boy: You a ballsy motherfucker, coming with some shit like that fresh out the box. But shit, I don't care, I get paid 35 cents every time someone ask me a question. Man, whatever, that nigga Ice-T old as fuck. You know how they say hoein' is the oldest profession? Ice-T pimped those first hoes they talkin' bout, way back before Jesus and shit. Man, this nigga got a B.C. birthday. That gold he used to wear, shepherds brought it to his ass in a barn. I learned all kinds of shit about him on Wikipedia, like his name is Tracy, and he played a fucking kangaroo in some movie, and he's like 1,958 years old or something, I didn't even care enough to read it careful.

Don't nobody wanna hear old dudes talkin', plain and simple. That's why rap is now, and will forever be from now on, for young hungry cats who sound like me. When you're in the club dancing, you wanna listen to people that could be there next to you, not people who stay inside their old-folks homes cuz they don't want to mess up their busted-ass knees. When I get really fucking old, like 25 or some shit, I'll give up the game, and ya'll haters won't have Soulja Boy to kick around no more. But someone just like me will take my place, because that's the way rap's gonna be. Nobody's tryin' to hear some shriveled-up raisin-head nigga hollerin' at them like some damn teacher about the "hip-hop golden age." The only gold I care about hangs around my neck, ya hear me?

Frost: I wanted to ask you about the term "swag." You have a song called "Turn My Swag On," and another titled "Booty Got Swag," and I'm trying to reconcile the two usages.

Soulja Boy: OK, swag means, like, the chains, the whips, the bricks, the flips, the chips, the dips. Even those shiny parts on those faggy-ass shoes you wearin', that's swag, for you.

Frost: In "Bird Walk," you perform the line "we too mean to get mugged." Recently you were, in fact, burgled, right at your home. Have you overestimated your meanness, or do home invasions not count as muggings?

Soulja Boy: That nigga Ice-T had a CD, or cassette or vinyl or stone tablet or whatever the fuck they used back then, called Home Invasion - I saw that shit on Wikipedia - but I know it wasn't him, because his weak-ass old skeleton arm would break just from knocking on the door. Man, fuck those two dudes. That money ain't matter to me, I made it back within an hour. If they were smart, they'd be getting paid for that wack-ass video they made. Next.

Frost: In a recent interview, you said "shout out to the slave masters! Without them, we'd still be in Africa. We wouldn't be here to get this ice and tattoos." Do you care to elaborate?

Soulja Boy: I was just fucking with that dude, Touré. You got someone with one name like that, that's some gay-ass shit, like RuPaul. I couldn't take him serious. Why doesn't he ask Ice-T about that slave-master shit, knowing his old ass lived through it? Ha, ha, ha. Fuck. I bet that dude's in the Bible. Do a search for "Tracy."

Frost: MTV News writes "The entire concept of Soulja Boy ... was a rather elaborate bit of performance art designed to point out the inherent ridiculousness of all of those stereotypes. Soulja Boy isn't real; he's a character created out of the public's misconceptions, a brilliant bit of social commentary sprung from one of the most brilliant performance artists of our time." Care to reveal if he's onto something with this theory?

Soulja Boy: Nigga, what? Man, it's like I always say, Soulja Boy Tell 'Em is just Soulja Boy Tell 'Em. I'm just the average eighteen-year-old, and people should be happy that someone like that is succeeding, and they should hope their kids turn out just like me.

Frost: Success in America is unlike success anywhere else. But with the United States enduring a harsh recession, did you ever think "perhaps my countrymen would rather not watch me ride a Segway through my mansion and blow my nose with $100 dollar bills"?

Soulja Boy: Ahh, it's just old motherfuckers, like Ice-T's ancient-mummy ass, that's hurting, cause they don't know how to make money on the Internet. I know young people still got stax, cuz they're playing against me on XBOX Live and buyin' my shit. Some people buy like twenty of my album, just cuz I tell 'em. When kids can still do that, shit ain't that serious. It's like I told you before, the next generation got it figured out. They go out and get that money, they spend it on some swag and some Soulja Boy. That's our future right there. Golden.

Frost: Regrettably, that's all the time we have. See you soon, America. God bless. God help us. 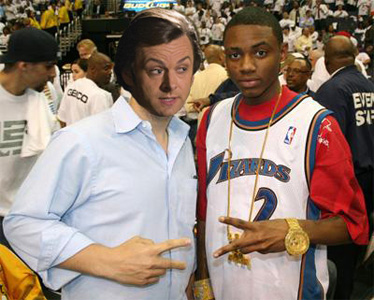