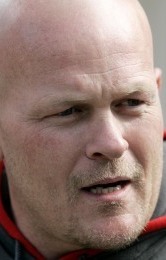 Joe "The Plumber Wurzelbacher reporting from Israel for pjtv.comWhen Pyjamas Media asked me to be a reporter on the war in Israel my immediate reaction was "yes." But my fool mouth has got me in trouble before, so I told them I would sleep on it.

After some extra thinking I said "hell yes." You know why? Because one voice has been lacking in the midst of all this war. That is the voice of the average man.

The elites in the world think they run everything, but if I learned one thing about global politics from my 17 years as an unlicensed plumber, it's that elites just mess everything up.

Think about it. When was the last time you heard of an average guy messing up the economy? Or an average guy starting a war? Never happened. Only elites have the time to think about that stuff.

Average guys just wanna look out for their family. They don't have time for starting a war.

What would they even want to start a war about? Things are looking fine to me here in America. As long as you don't come for my guns or one red penny more of my hard-earned money or to make me join a union or get my plumber's license I got no gripe with you.

So I boarded a jet to Israel to find out the real story of the war between Israel and Gaza. It was a long flight and they served chicken with something called rice pilaf. Very interesting stuff. I will have to see if we can get it back home.

I got off the plane and my guide was a very nice guy named Moshe Ben-David. You pronounce it "moy-she." Moshe said that first he would take me to ground zero where the Gazans have been shooting rockets at Israel. Then he would drive us to a hill where I could see the fighting in Gaza.

"The attacks are frequent," Moshe said.

"How many people died?" I asked him.

"A lot of people over the many years it has been going on and recently one," Moshe said back.

I nodded sadly to him.

"Hmm," Moshe said as he thought about my question. "I think you could say that. Yes." 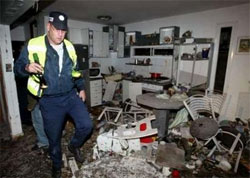 Israelis struggle to recover from brutal Hamas rocket attacks.The tragedy of the attacks for people like Moshe is that they come so suddenly. No one expects the rockets. Imagine a 9-11, only the planes could land anywhere. They could land among the family of the Israelis.

"A siren sounds and you have one minute," Moshe said. "You have to get to the shelter or your basement."

Moshe took me to a neighborhood not far from the border with Gaza and showed me some buildings that had been damaged by rockets. He pointed to a room where the rocket had blasted into the floor.

"A baby was sleeping only two rooms away and a few hours before this rocket hit. If he was still sleeping he could have been slightly injured by debris."

"What happened here?" I asked and pointed to the face.

"Oh," Moshe said sadly. "He is upset because a rocket hit his yard."

After the rocket attacks became too much to handle the Israelis were forced to act. With their airforce they used precision guided bombs to attack the rocket launchers. Some of these were situated in mosques and inside of the houses of families and at weddings and UN hospitals.

"The Hamas are monsters," Moshe said. "They use everyone as human shields. We have no choice. There are, unfortunately, some civilian casualties."