Your wide variety of religions is idiotic and confusing. They contradict each other, and none of your gods have ever come to wage war or collect tribute while I've been trapped in your world. I fail to grasp why you venerate absentee gods, when Golan the Insatiable is right here, ready to dominate you! Yes, I have since learned that your Santa Claus is a strange pacification prank you play on your young, and not actually a worshiped god, but as a stranger in your stank dimension (and rather intoxicated at the time, yes), you can doubtlessly understand why I took your Claus to be some fashion of minor deity when I saw a throng of people gathered before him on his blood-red velvetted throne, and why I viewed him as competition for your servitude.

The details of what happened next have already been documented in some detail in this pathetic newspaper, so there is no need for me to recount them - though, ugly Gazette editor Arthur Weaver, "flay" is not spelled with an 'e' at the end, something even I know despite having only learned this feminine language a year and a half ago! Your brains are all so small! I digress. 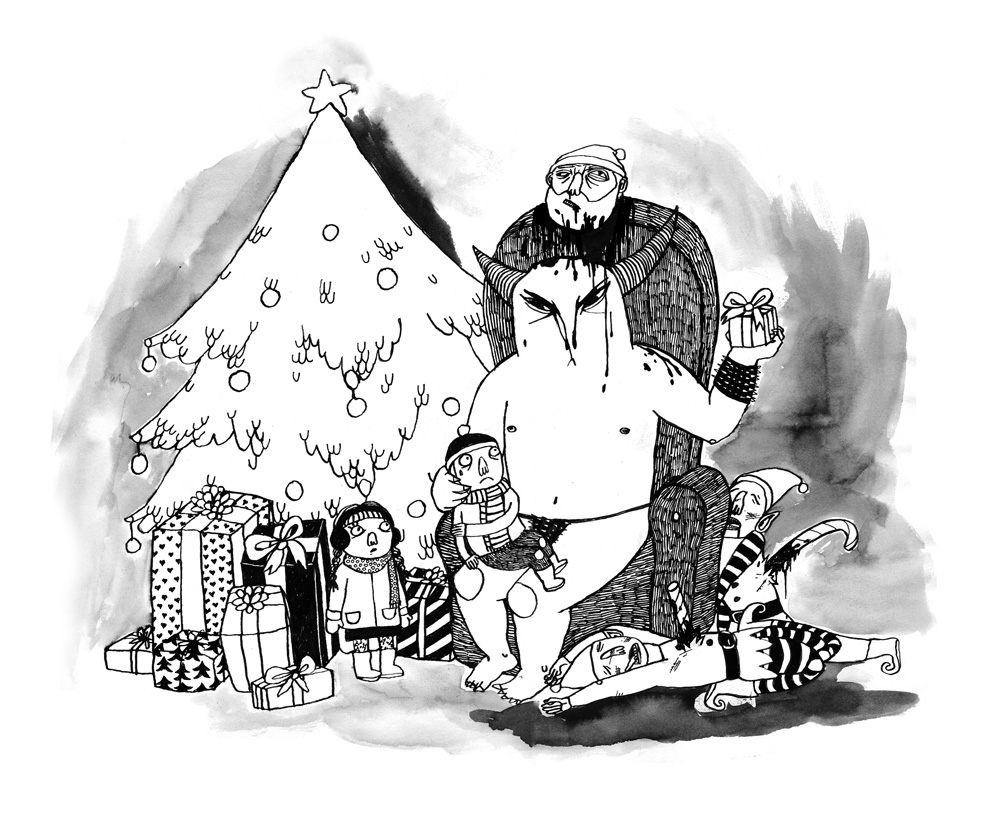 Yes, the elderly Erik Larsen serving as your Claus avatar met a gruesome end, but I most certainly did not sexualize him in front of your children. Watch the security cameras footage, fools! I assure you citizens of Oak Grove, if I sexualize someone in front of you, you will well know and shall be haunted by the sight in your nightmares and waking terrors alike for a lifetime! But yes, I did remove elderly Erik Larsen's head and display it on his throne, which I claimed. Yes, I drank some of his foul tasting blood, and yes, I did coat myself in it. Yes, I mortally brutalized two of Claus's elfin minions while compelling them to cower at my feet (odd, in Gkruool we have elves but they are tall and deadly). Yes, I forced some of your children to sit upon my lap as they did Claus and beg me for their trinkets and curios - though, I witnessed many childlings crying while atop Claus too, so I fail to see how their experience with Golan the Insatiable was any worse. None of them died. And the childling who lost a finger was portly, so I do not imagine his having only nine fingers will impair his future sloth. This was the "massacre" that eternal thorn in my side, one Mrs. Budnick, is calling "the last straw"??? I cannot not imagine you will be wooed by her rallying cry. The incident at the Mall was just a misunderstanding. Do not tempt fate, humans.

Let us call things even for the affront you showed Golan the Insatiable by not asking me to participate in your middling and overlong Xmas parade, even though Yor the Stupid was placed in vaulted status atop that hideous barge along with the high school football team (who had a losing record this season!).

Next Xmas - if my attempts to return to and re-concur my homeworld have continued to be fruitless - I think it only fair that I play your Santa Claus now that elderly and rotund Erik Larsen is dead. Unlike him, I can fulfill your children's gluttonous consumer desires. I will sack the Malls of irksome Poplar Bridge and Elk River and return the spoils to Oak Grove's greedy childlings! By this you have the word of Golan the Insatiable.

Do you enjoy Worm Miller's signature brand of bullshit? What if we told you there were entire books full of it?! Check out the author that Publishers Weekly called "cavalier and distasteful" and "blatantly disrespectful!"