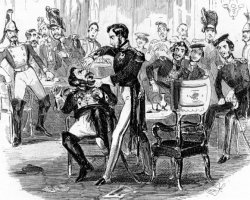 Greetings, and welcome to another edition of Heart Smarts, the e-series designed to help the good people of the Internet grow through sharing and caring. When I originally started this program in 2003, many called me a fool. Some called me a retard. Rich “muttonchops” Kyanka even called me a “stupid asshole”. But I’ve showed everybody through hard work and perseverance. My dreams of giving back to the community have blossomed into a working support program, despite all the mail bombs responding to my stance on aborting ghetto fetuses and turning them into nutritious smoothies.

Today’s Heart Smarts is on the very sensitive topic of bullies in the school system. Being of recessive Irish stock and blighted with red hair, my many years of experience of being a victim have given me insight on how the bully mind works. I have been to battle with these people all my life, and know them in my blood. I also know what it feels like to be on the other side of the fence: taking my anger and aggression out on somebody lesser than myself and becoming what I once hated. Of course the only people in school lower than me were the retarded children, and this was how I learned of their legendary strength when angered.

Children in society have a pecking order that mimics the adult world, a world where the people with the most money and power bully the poor and weak. It shouldn't be as a surprise that kids follow the same pattern, for it a natural cycle of survival in this cruel existence. Through hardships we build the strengths that will either help us grow as an adult, or suffer scars what will plague us until old age. Usually it’s a little bit of both, especially if you were tossed into a boiler like me. To this day, I can support and maintain any large commercial boiler system, yet my buttocks are covered in hideous burns that I hide with layers of woven fabric.

That all changed once the downtrodden started bringing guns to class and killing their tormentors. With the rash of school shootings that erupted across America -- the best known being Columbine --the cycle of taunting was broken, leaving schools in confusion and fear. This proved disastrous for the fragile ecosystem of the bully community, making grades plummet and leaving the education community in shambles. The bully is now too afraid to anger the wrong victim, lest he be marked for retribution by a professional hit squad while drinking his ecto-cooler in the cafeteria. Likewise, the regular school nerds are left lost and bewildered without the direction of juvenile abuse, much like a flock of sheep without a drunken, angry shepherd to prod them onward with tittie twisters. Both parties have suffered from this rapid change, and there must to be a return to normalcy among the children of America if there is any hope for them in the future.

In order to do this, we need to reteach the children of our schools the basic rules of the bully/nerd relationship. All these special counselors that are preaching "mutual respect" in schools are unwittingly detrimental to the cause, and should be given wedgies and tossed down an elevator shaft for being such wussies.

Here are some basic tips for both parties involved, presented in the hope of healing this great nation and returning to the bully system to its once proud stature in our society. 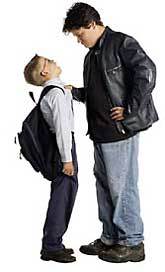 Be creative with your taunting: Shoddy bully work can only do more harm than good. Not only will it lower the level of fear for the target, but it can incite full scale revolts among the nerd plebian population. Stray away particularly from doing any rhyming when taunting. That's an easy way out and will fail to achieve the desired effect. One of my enemies once called me "period head". This made me sad, but I also respected the creative taunt as original and worthy.

Don't chase Japanese kids: When chasing a flock of perspective nerds to be pummeled, don't let yourself be led astray by any of the Japanese foreign exchange students. Sure, they are a tempting target because of their small stature and strange looks, but they are swift like the eastern wind and you will waste your time chasing them. Giving chase to a Japanese child will expend the your energy, leaving you open to any counter-attacks that could be disastrous for your bully reknown. Also, these Asian kids might know a martial art, or have robots hidden under their jacket. Stick to what you know.

Goths are fair game: After all the school shootings, the blame was shifted in various directions, including video games, The Matrix, and even Marilyn Manson. This has led to bullies distancing themselves from the Goth kids because of the fear of getting killed in a school shooting. This is a misconception that needs to be addressed. The kids who commonly participate in school shootings are not Goths. They are usually solitary loners that look completely ordinary.

This stigma of being dangerous is enjoyable for the Goth kids, and now they are becoming cocky because of the hysterical fear generated by their image. Bullies need to start beating them down again and put them back in their place, which is the Hot Topic at the mall putting clown white over their daily bruises.

Random Violence: Bullies need to instill the fear that anybody can be beaten at any time for any reason. This anti-logic is the perfect thing to set the mood for schooling, creating an air of violence that will keep the children in line and ready to learn. At least once a week, head butt a random child into a garbage bin and crucify him in the middle of the playground as an example. The heart of love is fear

Stop, drop, and roll: There are ways that you can make the whole process of getting picked on much easier for both parties. If you see a potential ambush in the hallway, just follow the same rules as if there was a fire in the school. Stop, drop, and roll. Not only will this lead to easy mockery, but the bullies will have access to a soft belly which they can kick at leisure. Being a good bully victim takes teamwork.

Play dead: Another way you can help out is to play dead after getting hit. At first this may scare the bullies, thinking they killed you when they flicked your earlobe from behind. Once they find out that it's just a ruse, however, they will probably toss you in the garbage bin. This will make them very proud. Just don't try this if a teacher is around. They might send you to the smelly nurse's office and call your Mom.

Wear multiple sweaters: Through the years I've learned that layers are your best friend. The more hits you can take, the more satisfaction the bullies will get out of the beating, and therefore the more the relationship of abuse will be strengthened. I once took 32 punches to the heart in a row without falling down. This set a new school record. I still have the award on my office wall.

We need to stop playing the "blame game" over the disturbing cases of school shootings. It wasn't the media, or the gun industry, or Depeche Mode. The schools lost their identity from fear, forgetting who they were and how to behave. It's time to return to a state of normalcy. It's time to say "start" to the cycle of violence that defines us as humans.

To help spread word of this new cause, print this page and cut out these buttons to distribute in your local schools. Let's step in and show these kids that we really do care for their welfare. (Buttons may cause paper cuts and/or fire hazards.)

Today we are going to talk about Livestock's new gentleman suitor, the sores on Seth Knisley's mouth, and the mysterious strange lights coming from Dr. Parson's mansion on the hill. You won't want to miss this!