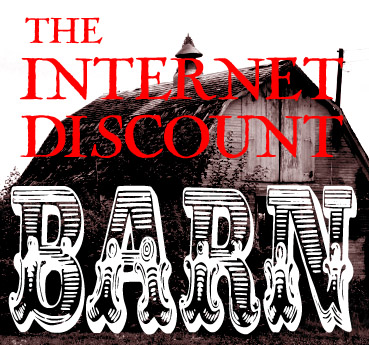 The Internet Discount Barn, established in 1994, is the world’s premiere newsletter for hot internet deals! We carry an ever-changing selection of unusual items at unusual prices (unusually LOW, that is!) We employ despicable tactics to get amazing items at outrageous discounts. Share in our ill-gotten spoils by ordering one of these hot items today: 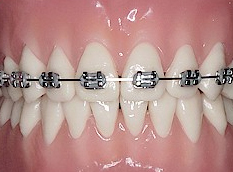 Just like these, but pried off and with some chunks of tooth on them.Refurbished BRACES – prêt-à-porter!
Got crooked teeth? The Internet Discount Barn has recently come into a dazzling selection of stylish, chromed, ready-to-wear braces! All shapes and sizes to solve all types of dental woes! Internet Discount Barn is the world’s leading salvager of school bus accidents! Some braces are slightly bent, but can be hammered to fit your mouth or your child’s! Some are still glued to fragments of tooth, which can easily be dissolved in Coca-Cola, or so legend would have it. Why pay thousands to orthodontists when these lightly used braces can be yours for the rock-bottom price of $6 per bracket?

Fables Fables Fables!
Need gentle moral guidance? Internet Discount Barn stocks the highest-quality b-list fables, rejected from the manuscripts of some of history’s top fabulists! Meaningful but unpalatable or unpublishable not-quite-classics from Aesop, Phaedrus, Uncle Remus, and other apocryphal figures! When you order from Internet Discount Barn, you’ll receive a twine-bound parcel of more than a hundred pages of loose-leaf fables. Below are some examples of the great fables you can enjoy with your family:

Many fables were rejected with easily discernable reason, such as possibly accidental advocacy of eugenics, drug use, anti-Semitism, and teenage promiscuity. Use them as cautionary tales, or even as filler for Neo-Nazi pamphlets! The Internet Discount Barn wants nothing to do with your politics, but would die for your right to express your views! Only $8!

Hubcaps!
Don’t ask how we got them, don’t ask why we need to SELL FAST! Five assorted hubcaps for five dollars. It’s a steal! Don’t read too much into the fact that we put “steal” in italics! 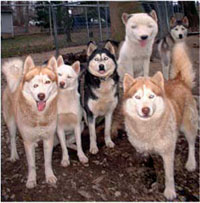 Irregular dogs at breakneck prices!Sick of Walking? Sled Dogs Too Expensive? IRREGULAR HUSKIES!
You won’t win the Iditarod with this team of irregular huskies, but you might just get from point A to point B! A dozen pure-bred Siberian sled dogs with irregularities ranging from violent temperaments to extra legs to hoofed feet! One can control fire! We don’t lie, these dogs are the bottom of the barrel. No shelter in the world will take these dogs! Make a coat with their skins, grind them up for meat, or elicit pity with their tragic deformities! Some of them make great companions; others will try to bite your neck out. Exercise caution around these and all other irregular animals. Fifty bucks for all of them!

Habbages!
We have hundreds of crates of habbages, farm-fresh and ready to be sold! Probably mislabeled boxes of cabbages, but possibly something entirely unknown to us! Internet Discount Barn has never heard of habbages, and is frankly unwilling to open the crates due to pungent odors and superstitions caused by unnatural events surrounding the boxes of habbages. We’re scared stiff! Get these out of here! $3 a box, who knows what you’ll get!

Science Teachers REJOICE: CHILD SKELETON DEEDS!!!
Poor families from around the world have sold us the deeds to their children’s skeletons at rock-bottom prices, and we pass the savings on to YOU! Upon the death of the child, the skeleton is yours! Many of the third-world countries involved have ASTRONOMICAL infant mortality rates—these skeletons could be yours tomorrow! Unscrupulous buyers can easily arrange “early extractions”! We’re not squeamish about doing morally indefensible things for super-savings! Act now before landmines render these skeletons incomplete! $30 per deed, 25% off when you buy a dozen! 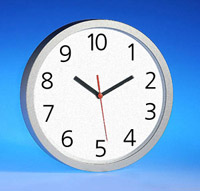 It's "TIME" to get rid of these CLOCKS!Baffling Metric Clocks!
We don’t know who made these clocks, or why! They go in ten hour cycles, each hour consisting of ten minutes! No correspondence to the unimpeachable reality of the sun’s movements. We don’t know what to do with these things, but maybe you do! If you order now, we’ll include defunct tickets to appear in the live studio audience of NBC’s long-since-cancelled “The Single Guy,” starring Jonathan Silverman! These tickets are guaranteed to appreciate in value if extraordinary circumstances cause them to! We hate these clocks, because we feel like their manufacturers know something we don’t! Get them off our hands! $60 each.

Hateful Little Man
Small, hateful creature, proportioned like a man but a mere three inches tall. We found him in a box of bananas. Naked and surly. Yells withering abuse in a tiny voice, like a kitten. His existence may or may not be an affront to God. We wanted to squeeze his little bones out for all the sour, hurtful things he said, but the stock manager said that killing him would only make him stronger (?). Take your chances on killing him, keep him around as a novelty, or get into arguments with him. Requires no food, water, or sleep. One of a kind, we hope! $6,000, including bell jar.

Obscene Materials in BULK! Would make J.G. Ballard faint!
Crates of publications, videos, artworks, statuettes, and other sundry products deemed obscene by the United States government and turned away from our ports. The Internet Discount Barn snagged them and secreted them into the country in the dead of night! Some of these obscene materials are relatively mild, and we disagree philosophically with the government’s contention that they should be suppressed. Others are indescribably lurid, disgusting, and perverse. In each grab-bag of obscene materials, we will include at least three “tame” items, which are no more obscene than America’s most disgusting hardcore pornography, and at least three shocking, disgusting, or perverse items. Many of these disgusting works involve filmed depictions of actual human death and mutilation, while others are simply profoundly and unforgettably disquieting for unmentionable reasons. Is your curiosity piqued? $200 per box.

Super Nintendo Cartridges! Unlicensed CLASSICS at great prices!
Collectable Super Nintendo video game cartridges in great condition! Many still have original boxes and instructions. These are all totally unlicensed and unapproved by Nintendo, so keep this hot deal on the “down low!” HOT TITLES!

Slumlord – Prey on the poor as the owner of cheap tenements in the south Bronx!

Girlie Fiasco – Not for children! Unlicensed cartridges mean no limits on content! Classy ADULT party game in which you guide a highly stylized cartoon phallus through a maze of temptations! The New York Times called it “a testament to the enduring power of art to rouse the human spirit.” Sizzling!

Husqvarna Chainsaw Hootenanny – A promotional cartridge briefly given away with Husqvarna chainsaws in 1993. Content so disturbing that we almost put these in with the boxes of obscene material! A real hoot, if you like chainsaws and child nudity.

Get all five cartridges for only $25! 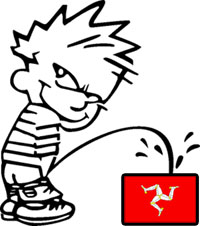 Keep an eye out for future Internet Discount Barn Newsletters! Should you wish to unsubscribe and miss out on all our HOT DEALS in the future, click here and send a message with the subject “I AM AN IDIOT WHO WANTS TO MISS OUT ON HOT DEALS!”