He hesitates. I wave with the gun, somewhere between a reassurance and a threat.

"Y-you were dead, they thought, and then the wardens came looking for them. You were off the register so the pass was revoked. They took them."

"I don't know," he can tell I'm not satisfied and quickly adds, "TVA maybe. Watts Bar? I don't know. That's the rumor. Work crews for the...you know...the angels. More of them coming through."

I stare at him, my rage unfocused and only barely contained.

He hurries past me down the stairs. He stops at the bottom of the steps and turns back.

"Tara? Heather? Which one?"

He snaps his fingers.

I slump against the wall. I saw the briefing maps. Columbus was near the front weeks ago. It is probably long gone. He says something else, but I don't hear him.

Later, his mother comes to the door. She says something to me. Tells me something that I can't even hear. I take the dish of food she is offering and walk back into my house.

I sit down on the couch, take my pistol from the holster, and place the barrel in my mouth. The pounding will stop. The anger is gonna stop. This fucking nightmare is going to stop.

Even with my death only fractions of a second away, I can feel them. Pushing and poking like I'm a caged animal at their fucking zoo. Trying to get into my head.

I take the gun out of my mouth.

"Leave me the fuck alone!" I scream.

Jamie and his friends took most of my good booze, but there are still some bottles of wine and an old bottle of scotch under the sink. I shovel tasteless casserole into my mouth like an animal. I slump on the sofa with the bottle of scotch in my hand and I turn on the TV.

It's sort of surprising it still works. At least something does.

I flip past the news shows. Bulletins on every channel. Church services and prayer groups for our troops. A slick-haired pastor literally sings the praises of the Angelic Host. Just monsters.

There. I flip back. Cartoons. Old cartoons. Space men and a robot maid.

Maybe it's the cartoons, maybe it's the scotch. Either way, the tone begins to fade. The throb of my head is lessened.

Maybe I will live a while longer.

Maybe I will watch to the end of this episode. 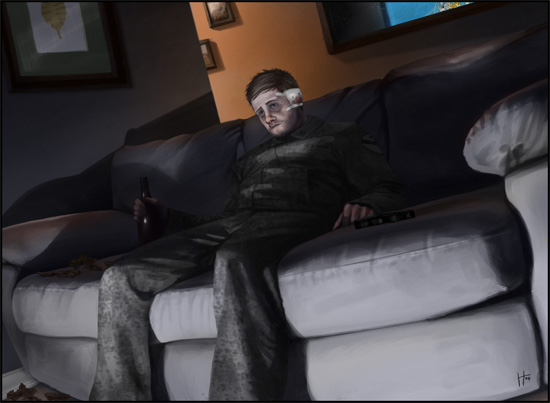