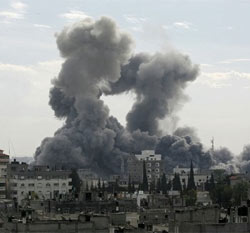 Israel is really really careful about their bomb targetsNobody wants Gazan civilians being killed or injured, especially not the Israelis.

"We care so much," said Moshe. "We never want to hurt anyone, but we have to defend our settlements."

The hundreds of women and children killed by Israeli air strikes, artillery, tanks, and machine guns are a tragedy.

"And the UN ambulance the tank shot," Moshe added to the list.

These are all tragedies, but sometimes sacrifices have to be made in the name of security. If a serial killer grabs your wife and your baby and uses them as human shields you have to do what needs to be done.

You have to use your brain in situations likes that. You have to shoot the baby because it can't take care of itself without a wife, but with a wife you can make a new baby.

I smiled and we walked out to go to Moshe's truck. On the way out two kids and an older man with those little hats came running and said they were settlers.

The one teenager was named Abraham and another was named Tzabar. They were brothers. Their mother had been wounded badly by a rocket.

"Shrapnel hit her in the foot," Tzabar said in a foreign accent. "She was sitting on the couch and BOOM the rocket hit outside and shrapnel hit mama in the foot!"

They were very excited and upset. I asked them about their mother.

"She is okay now, but she is at the Marriott in Tel Aviv now."

The older man was Sol Rozen. He lived near the boys and he saw another rocket hit a dog.

"One second it was standing there just fine," Sol described to us. "The next second there was no dog. I looked around and around and then I saw him up in the tree. He was okay, but he was very scared. He did not know how he got up in that tree. Damn them!"

It was good to meet with the average Israelis I had requested. I shook their hands and wished them luck.

Moshe drove his truck to a hill. From the hill we could see explosions in Gaza. There was smoke and helicopters. I could also see some tanks driving around. 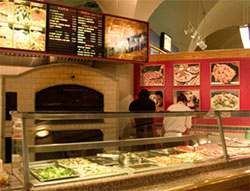 I took this one with my camera phone. Surprisingly, Sbarros in Israel look similar to those in malls in America. The pizza tastes just as delicious too!He handed me some binoculars and pointed. I heard a jet overhead and then there was this big flash of light and then like a full second later there was this boom that shook my head.

There was a huge fireball forming. It looked like a mushroom cloud it was so big. It wasn't a nuke though, just a really big bomb.

We had to go after a little bit because the tanks were driving into a school for the deaf and Moshe said he didn't want me to get stressed out.

He meant Sbarro pizza. They call pizza "pie" in Israel. We went to the Sbarro and I got a pepperoni pizza slice and Moshe got one with black olives.

I wanted to talk to some average Gazans about what was going on, but Moshe said it was too dangerous.

"Maybe after all the rocket launchers have been destroyed," Moshe said. "Then it will be safe to go to Gaza."

That is my report from Israel. Stay strong America.