"Our fields are fallow, our animals stricken. The ague is upon our people. Why? Why brothers and sisters? This fate comes to us not unseen, but borne on wings of insurrection. Confess, give up your secrets. It is your only hope to avoid this curse. Save this state so that we might endure. Purge the corruption that lies upon us a heavy stone. This is the Time of the Shrift."

- Alex Caesar, Emperor
Upon the commencement of the Time of the Shrift


With the Praetorians cleaning up the last of the resistance and the surviving laborers cowed, things seemed to be in order. Peace and prosperity returned for several days, but the end was not to be easy for Bonanza City.

The city's animals began to fall ill with a mysterious illness. Disease spread among the populace, a "curse" pronounced by Nathan Pontifex Maximus, brought on by "corruption and idleness." Some fell sick, others began to mutter unhappily. Alex took action, quarantining the sick and ordering the dead buried or burned. One bloody night he instructed Jared to purge the triumvirate, leaving Alex as the sole ruler of Bonanza City.

Alex grew increasingly paranoid amid the death and famine. He saw conspiracies everywhere, scarcely trusted Nathan or Sophia. Alex felt the only way he could truly know that his closest allies could still be trusted was to device a test of their loyalty. On the night of the 39th day he instructed Sophia, Nathan, and Jared to lock all of the buildings in Bonanza, including the barracks of the Praetorian Guard, and then set them on fire. Jared was left with instructions to kill Sophia and Nathan if they did not follow the order. 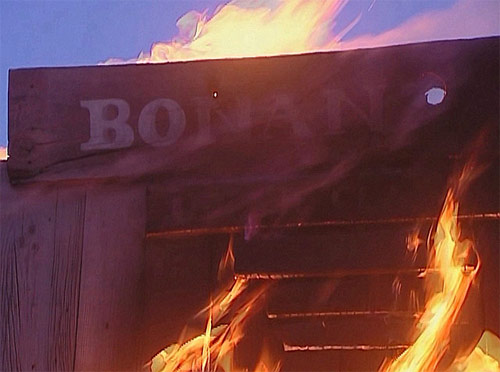 They did. In a final apocalyptic night, Bonanza City burned as those trapped inside screamed in agony. The next morning, Kid Nation host Jonathan Karsh arrived with the parents to find a gutted ruin of Bonanza City and four survivors. It was the End of All Things Nathan had long predicted, but never quite believed.