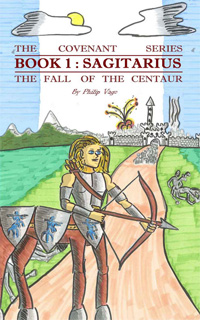 Sagitarius : The Fall of the Centaur (Covenant Series)
By Philip Vago

Philip Vago's nearly 1200 page epic about Sagitarius, a heroic centaur, reads as less Tolkein and more Henry Darger. Elves and dragons and centaurs and tree spirits and every fantasy creature you could possibly imagine do battle, but it's mostly about the tedious battles of Sagitarius and his band against the human Cable and the evil Latenians. The repetitious style would be generously called "stream-of-consciousness" and regularly dips into anachronistic metaphors.

Somewhere in his head, Vago has constructed an obsessively detailed history of his centaur fantasy world. Fine, nerds love lore, but the constant asides to history and references to past battles weigh the juvenile plot down like cement shoes on an astronaut. The resulting book seems to be the product of mental illness.

The who in the where?

Vago spends page after page recounting ancient battles, but he does not condescend to readers when it comes to his silly geography or names.

Upon their arrival in Oshlosht, the border town between Ulusia and Narvia, Sagitarius directed Callou to find them some shelter and a youthful filly, Silvae, to find them a place to eat.

If you can't figure that out, you can always check the map:

Who was this written for?

Philip Vago's family. The book is not as howling terrible as Centaurs (Parallel Worlds), but it features the sort of pointless monotony that only a mother could love. My own work has often been criticized for being too long and needing a good editor, but at 1200 pages, Vago doesn't need an editor, he needs dynamite.

"I can't believe it." He said, dumbfounded. "Don't hurt them without mercy and jurisprudence, or you may regret what you've done later in life. Don't take part in a righteous crime."

Also from this author: Sagitarius Trilogy: The Art of Survival (Part 3)