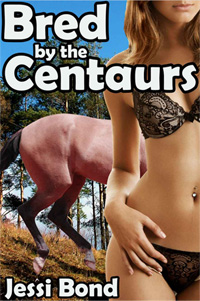 Bred by the Centaurs
By Jessi Bond

Before people get up in arms over the next Amazon rape t-shirt they might want to swing by the Kindle centaurs, because these guys are seriously up to no good.

Did this turn into a thing when I wasn't paying attention? Do women go around quietly holding in the rage they feel for men not doing this? Because if so I have a feeling there are a lot of Sarahs out there cruising for centaurs to do them right.

Lucky for Sarah and Jared, things turn out just fine in the end, because after a gang of centaurs put a baby horse in Sarah, Jared overcomes his aversion to eating pudding without a spoon and chows down on a gravy boat made of meat. Lady meat. And horse gravy.

The centaur chuckled. "Too proud to eat his own essence out of you? For shame. He doesn't sound like much of a man to me."

Yeah, okay buddy, you're literally not a man, so don't go kicking your water bucket around the glass paddock.

Hi, me name am Shelby Villar and me bought book about centaur gangbanging woman and there not enough story about eat a sperm for my discerning taste not a rip off.

Also from this author: Bred by the Yeti