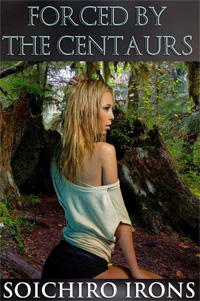 Forced by the Centaurs
By Soichiro Irons

Once again, the author has carefully considered the logistics of how a woman could have sex with a creature that is exactly proportioned like a horse, but totally not a horse. When it finally happens, the centaur sex scene is so long that during the course of it Lynn falls in love and has a flashback to growing up on a farm.

The "can't rape the willing" moment:

Centaurs are forcibly breeding human women. Voluntarily. A horse seducing someone is fine, but a horse raping someone is mondo grosso.

"It doesn't matter who captured me, Caleb. What matters to me is what you said today, back in my room; you're the first male centaur to speak to me as if I weren't a piece of meat. You told me I was brave...you told me you admired me. Everyone else just wants to fuck and breed me like a sow, but you proved different. I don't even care if it was just an act to get me here - it still meant a lot to me."

Soichiro Irons takes an interest in the logistics as the centaurs once again set up a sex table for human-centaur relations, also in front of the entire tribe of centaurs.

My attention was drawn to the large wooden platform that two massive males were tugging through the crowd and into the center of the square. On top of the platform was a raised wooden stand that looked a bit like a pulpit. Two leather stirrups protruded from either side of it, and a ladder led up to where the event would take place.

So that's what The Event was about! If NBC had teased centaur fucking a little better they might have saved that show.

Also from this author: Forced by the Alpha (Gay Reluctant Werewolves)


NOTE: It is my duty to inform you that the three centaur smut stories, purely by gross coincidence, are all written by Something Awful goons. The weirdos who wrote the first two are probably goons too, but that has not been confirmed yet.