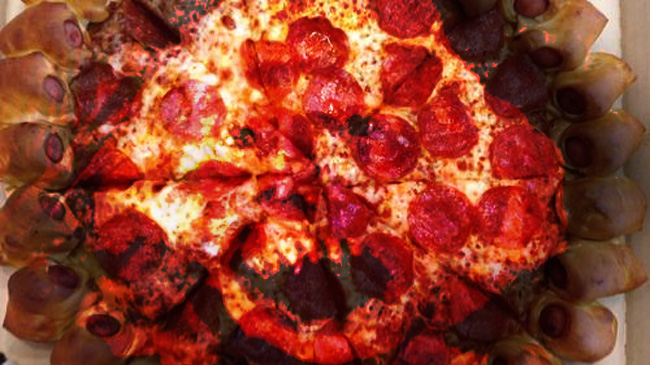 As I passed by the teenager, I glanced at him and saw a ruin of flesh with cloudy eyes misaligned and a puckered wound for a mouth. He hissed angrily and spit down his chin. It was as if my gaze violated him and so he turned away and covered his face with raw and ragged hands.

I hastened through the door and into a long hallway. It had a distinctly downward angle and when I looked back I saw up a much steeper slope than I recalled descending. The door had closed behind me. Somehow I knew that it would not open until I had eaten the hotdog pizza.

I followed the hallway down. The walls narrowed. The ceiling grew lower until I was forced to stoop and then to crawl. I arrived at a door - a hatch more accurately, which was marked, complete with misspelling, as "Employes Only."

I crawled through the hatch and dropped from the ceiling into a room in every way like an average manager's office at a fast food restaurant. A Pizza Hut uniform, complete with apron and visor, hung from a hook on the only door out of the room.

On the manager's desk was a box of Pizza Hut pizza. Grease discolored the lid. Something had oozed out through the cardboard on one side and exuded like serum upon the desk. My dread grew with each passing moment. I knew that if I did not act, that fear would overcome me completely. I swallowed my bile and flipped open the lid. 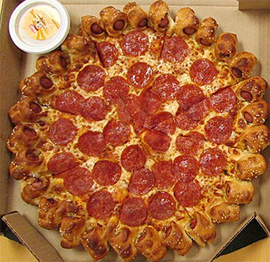 The thing was made from cheese and meat in almost equal quantities, the red beneath showing through in bubbling fissures, cut haphazardly into slices. Its face was like that of the teenager. Its wounds fresh. Its grease dripping. Fleshy fingers reached out from an encrusted mane brushed with garlic. A quantity of mustard offered some compromise of the familiar in this wicked conglomeration of horrors.

There was more than pizza at work. I felt as if I bore witness to the final stage in some cycle of life previously unknown to me.

"What is this?" I wondered aloud.

"This is what you've wanted," said a familiar voice, like that of a baby. "The truth you have sought."

The hotdog fingers wriggled. One escaped from its crusty nest and rolled onto the floor. The soft voice laughed. He was here, watching me from a camera.

The finger seemed to be trying to escape for the door. It left a slug's trail of grease behind it.

Perhaps this pizza had always been on this desk, waiting for me. Some cosmic trap, part of an unknowable agenda, laid at the moment of my birth. I had walked into it.

None of that mattered as I ate the hotdog off the floor. Nothing would escape me. I turned my attention to the pizza. I scooped up grease saturated slices and folded them into my mouth. These had the consistency of wet bandages. I barely chewed at all. Panting, mustard-smeared, my gaze kept returning to the Pizza Hut uniform hanging on the door. Bite after bite, I ate until it hurt and kept eating. I did not stop even as I felt it changing me into something other than myself.

My face began to bubble.