Changle, China: The City of Farts

We arrived at 9:00 AM and leave around 4:00 PM, proudly walking out with seven light fixtures. That's one light per hour, which also corresponds to how we travel down the streets in heavy traffic. A farmer who had been selling melons is now receiving repeated blows to the head from a municipal police officer. My friend explains he was selling his fruit in an unauthorized location, which baffles me since every vendor sells everything in unauthorized locations. I'm fairly certain China doesn't even have an authorized location.

The officer grabs the farmer's cash purse and flees to his truck, taking off under a barrage of melons being hurled by the irate farmer and his companion. The irate salesman tosses a melon to the ground in utter contempt, unaware he's dooming his business even further. Another day in the land of the cutthroat, violent fruit-sales industry.

We arrive back in Changle, where a tornado-like vortex flings all forms of transportation in every direction. Cars peel down arbitrary sides of the street, unafraid to cruise down the bicycle lane or even the sidewalk if they're in a particular hurry, which they invariably are. Motorbikes travel in swarms like hordes of drunken bees. There are a million ways to die in China, and they're all traffic-related.

Unable to find an open parking space, my friend opts to park on the sidewalk in front of a billboard that displays a cartoon grandmother either smiling or grimacing, along with the text "GRANDMOTHER'S MILK." Is it a valid parking space? "I don't know, I'll find out if I get a ticket" he responds. 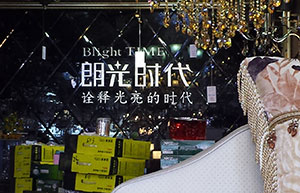 The hunger of haggling has taken its toll, forcing us to seek dinner somewhere amongst the roughly 500,000,000 restaurants. Our journey takes us past two men outside a KFC, kneeling on frayed rugs, screaming incoherently in the direction of the front door. A very large camel sits calmly behind them.

We're witnessing the Chinese version of a shakedown, and these two men will refuse to leave the sidewalk until the restaurant manager agrees to give them a "donation," at which point the men will travel to the adjacent restaurant and do the same. Because these donation-seekers are part of a local ethnic minority group, they are immune to a majority of Chinese laws, and therefore they don't have to worry about being tossed into jail or beheaded by the government. Needless to say, they are a very popular group of people within the Chinese community.

Upon returning to the hotel, I notice the two prostitutes in the lobby have been replaced by a short, dark-skinned man who is screaming at the clock. Chase explains that this individual is somewhat upset at the hotel's daily price, and he has chosen to express his feelings by constantly shouting. I asked my friend if this negotiation tactic commonly works, and he said "never," so perhaps the man was expecting the odds to change. The clock continues to tick as I wait for the elevator and the furious man barks foreign obscenities at the concept of passing time.

I have survived another day, my reward presented in the form of yet another prostitution business card slipped under my door. This one depicts a woman covered in some sort of anti-mosquito mesh cloth, perhaps to assure customers she's free of large bug bites. I add it to my collection of "THINGS TO DO LATER" and prepare to relax for the night by jumping into bed. My back cracks and I feel as if I fractured my arm; the day's excitement caused me to forget the steel composition of my bed. What wonders will tomorrow hold? I have no idea, but I can guarantee you this: It will smell like a fart.