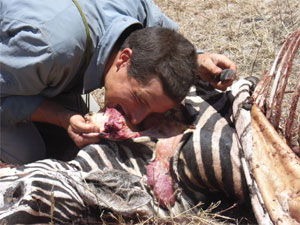 Bear Grylls IS PRETTY AWESOME YEAH WOOAlthough I generally don't care if TV magic isn't real, I know that the truth is important to a lot of people. That said, I used my contacts in the survival-themed reality TV circuit to get more dirt on Bear Grylls. What fallows is a list of falsehoods and fictions proliferated by Bear Grylls and his Man vs. Wild fantasy series.

If you ever find yourself lost in the wild, I recommend that you just panic or call 911 on your cellular telephone and not actually try to survive. You really aren't qualified to anyway.