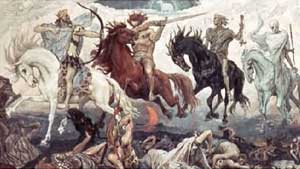 My investment strategy.Worries about credit markets and the apocalypse derailed stocks for the second straight session, even amid strong corporate earnings from Amazon.com and Vivid Video.

The Dow Jones Industrial Average (now batting .211) struggled to recover as trading was suspended for one hour due to a security threat on Wall St. At approximately 1:21PM security detected a person with a soul on the trading floor. The suspect was detained and the area quarantined.

Trading resumed but not without the Dow tumbling 100 points. It eventually recovered. Then it fell again. Then it rose again. Then fell because of who knows what. Then it didn't do anything. Then a bell rang and everybody went out for pizza.

The broader S&P 500 and Nasdaq Composite Index are still missing and presumed dead.

Google (up $14 to $48,527) saw shares rise about 2% following the announcement of Google's intention to take over the world. Google supervillain CEO Eric E. Schmidt announced today his plan to use Google's all encompassing control over all data on the Internet to enslave the human race.

Just last week Google announced Google Memory Beta, a device that allows users to store their memories on Google servers for safekeeping and easy retrieval (if you need an invite just email me!). Google's search engine, desktop search programs, email service, and mind reader storage devices have given Google enough dirt to blackmail all Earth citizens and destroy their will. Shares jumped sharply following the announcement. 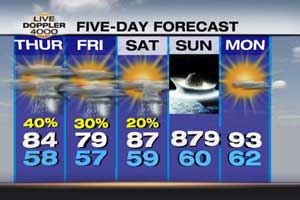 Lookin' good.Industry analysts predict that Google will unveil their new Google Earth program at their earnings announcement next week. And no, we don't mean software.

In the entertainment sector The Walt Disney Co. (down $.40 to negative 8) has finally thawed its founder. Upon learning what his company had become he went on a killing spree, closed down The Walt Disney Co., and hung himself. There were no survivors. Should've thawed Roy instead.

My friend's dad's liquor store (up $1.25 to $40.50) shares rose after a report released by MADD showed alcoholism and drunk driving related deaths up by 40%.

The real estate market is showing signs of improvement just a century and a half after a subprime lending meltdown that caused riots, mass homelessness and a volcano to rise out of the Earth and swallow California. With much of the Earth's habitable land now lava, new home prices have skyrocketed. Beachfront property in Denver now commands prices up to 70 billion dollars. Only the world's richest man and first living cyborg (half man, half James Woods), Richard "Lowtax" Kyanka, can afford one. Most understood James Woods, but why Robocop?

Late in the trading day the Dow Industrial Average announced that it will only be following one stock from now on, Google. Google can do no wrong. All hail Google, the one true God. 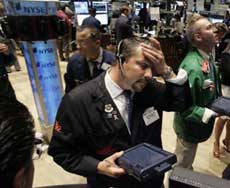 Check this out. It's a picture of the stock market. This update is kind of about the stock market. It's a perfect match!The dollar fell against the nothing now that it is the last currency in use on the planet Earth. Most Americans however are holding origami tournaments with their money as it is mostly worthless. All other industrialized nations have safely evacuated their citizens to other planets, taking their currency with them.

The Ghost of Michael Moore's new movie "Dude, Where's My Spacepod?!" opens today. The film criticizes the Furher's incompetence in evacuating American citizens from Earth when all other industrialized nations, including world capital Cuba, have managed to do so. While the film offers no real solutions it does point out how comfy New New France II's spacepod seats are. Oh, sweet, they even have TV screens in the headrests.

The new Dow Industrial Average, which tracks the eternal success of Google (up infinity to infinity), rose to a new high after Google usurped United States Furher Johnson and declared the country's new name the United States of Google. This publication, now owned by Google, welcomes Google as new Earth dictator. Google out.

Economic analysts predict that as our final days on Earth go on the market is expected to do better than average. Those who emigrated to Mars and are investing in Earth's demise are advised to hold onto their shares until tomorrow's meteor strike. Investors will be in a very good position should the deathtoll exceed mass extinction.