The Diary of Andy Frankle 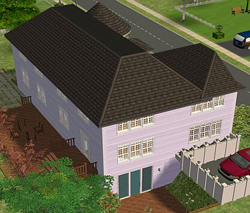 My house (as created by me in The Sims)Friday, August 15th. Today is pizza day, and yet, there is no pizza. Some luxuries are not available during times of struggle. No, only a hot pocket fills my stomach tonight-a lean hot pocket no less. Sure, pizza is still available to everyone else, but not me. Hiding involves not being seen, not even by Ben, my pizza delivery friend. I wonder if he misses me like I him. The world tests the strong, but it also tests me for some reason. Sometimes I feel like I won't make it. Hopefully there is light at the end of my journey, for Spore is to be released in early September. Until then, I am alone in this empty space with my laptop and a poster of Vegeta.

Sunday, August 17th. It's been three weeks. Three long weeks since I took refuge within the bowels of my home and so much has occurred in the outside world. Russia has started a war, McCain has befriended a woman, and Subway has started their Scrabble contest. Also, my community college has started, though that is a secondary event. I have swells of optimism due to the McCain news, if he can make a female friend, then maybe, just maybe, I will as well--if I ever escape this. But now, oh, how I long for Subway. No pizza and no $5 meatball subs. How long is a man to last?

Wednesday, August 20th. My mother, the main tormentor of my life, stopped by today. She walked through the house screaming my name. I heard her tearing rooms apart looking for me; but luckily, she did not stumble upon my hiding spot. Our last argument before my departure was about Spore, the future game of the year. I calmly listed all the reasons why I wanted to take a semester off, but she did not understand the importance of the game. She said many mean things that I do not want to rewrite, and she threatened to discontinue paying my rent if I do not enroll. I refused to budge and now I spend my days behind a fake wall in my pantry. I will not back down.

Friday, August 29th. Sorry for the length of time since my last entry. Looks like my mother has rented out my place to someone else. I would be insulted, but the new tenants have filled the kitchen with goodies. Unfortunately, the new people have also decided to bring a cat. And while it is cute and calico, its loose hair and dander is causing my allergies to go crazy. Without my antihistamines, I often fall into bouts of sneezes and projectile snot cords. My computer screen is dotted with bits of dried mucous. It sometimes feels like God is against me. Regardless of my allergies, the new tenants are yet to notice me or their missing cinnamon pop tarts.

Monday, September 1st. Happy birthday me. 25!! I imagined a perfectly enjoyable party hosted by Vegeta and I, how very grand! There were all sorts of people there including the vice president lady and Dan. Dan even brought me a pizza. The imaginary celebration ended when the new people emptied the cat's litter box into the garbage outside of my hiding place. Now everything smells like cat poop. I spent much of the day playing Spore creature creator. I made a Homer Simpson creature. It made me lol. Sometimes I wish that I could use a real-life creature creator. Maybe that would be too much like playing God, but all I would want to do is give me some extra bravery points on the attribute scale. Maybe then I wouldn't be in this mess. On the bright side, I squeezed a bunch of the tenant's HoHos together to make a rudimentary birthday cake. Overall, it has been a very creative day.