Midwestern Myths About the West Coast

You Won't Catch Me on Those Crazy Roads of Theirs! 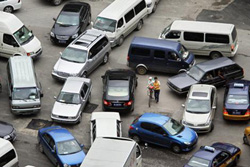 How about those crazy California roads, eh? This image brought to you by sillypictures.org, and The Joke Council.To be fair, coping with traffic and complex roads can be kind of overwhelming if you're not used to it. Case in point: I traveled to New York City last summer with my friend Michael, and was driving under the speed limit in order to get my bearings in a new environment. On my last day there, a colorful New York-type character (you have probably seen them on TV's Seinfeld) driving behind me spotted my license plate and shouted, "Go back to Ohio!" to which I responded, "I AM!" Michael tells this story to every person he can, and usually in front of me; this is why I spend what I like to call my "downtime" thinking of ways to murder him.

That said, the complexities of the double-turning lane can be mastered with the use of flash cards, and are no reason to not visit the towns which employ these marvels of traffic on their roads. Really, the only driving hazards you have to worry about in California are the swarms of rollerbladers, who typically grind out sick combos on your car while flocking to the nearest grove of marijuana trees.

Everyone Out There is Weird! 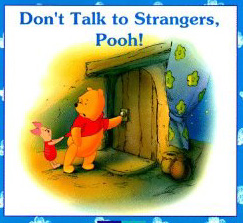 "THE WORLD IS SO HORRIFYING AND HOSTILE THAT EVEN THIS BELOVED DISNEY CHARACTER IS IN DANGER OF BEING SEXUALLY ABUSED." - Every authority figure from my childhoodBecause of programs like D.A.R.E., school assemblies, very special episodes, and scared straight programs, throughout most of my life I was taught to fear others and to possess nothing but contempt for every fiber of my being. I spent years afraid to form personal relationships with other people because somehow I knew that they would snatch me away from my parents, get me high on drugs, and then take me out for a wild night of drunk driving and improper bicycle safety. And because I lived in a particularly geriatric hive of the suburbs, it was possible to avoid human contact altogether, and instead bask in the glow of empty culture. And this is how comedy writers are born, especially unsuccessful ones who have been coasting on the same topics for half of a decade.

So I can say it's been more than refreshing to live in a place where people willingly make eye contact, instead of beating you to death with a piece of rebar just to feel like they have control over something in their barren lives. A place where people don't save their paltry disposable income to forget their way through the weekend at the same local bars, while strategically avoiding ex-high school classmates, ex-girlfriends, and community theater magnates.

I'll never be able to shake off the years of isolation and baggage from growing up lame and Midwestern, but I'm hoping the natives can at least teach me to chill the fuck out before I write the next article in this series about the cosmically damaged state of California. Watch for it when my sunny idealism fades like a CafePress T-shirt.