I wake up in a haunted castle with no memories and a splitting headache. Normally, I wouldn't mind, except that sometime during the amnesia period I've gotten fat. My arms and thighs look like moonscape photos. My paunch looks like it's smuggling a small Mexican child. My face, I imagine, resembles Marlon Brando's after an allergic reaction to a bee sting. I search my pockets for any clue of how I got here. All I find is a Snickers bar, but that's okay because I'm hungry. 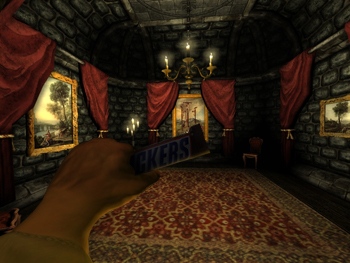 A moaning sound beckons me from down the hall. I venture out into the corridor, which is lined with suits of armor and candelabra. Cautiously, I tread toward the source of the noise. I scan my memory again, but it still reads like a book of blank pages; all I can recall are a few lines from the movie Robocop and the fifth season of Saved by the Bell. The hall leads to a stately dining room with a wooden table and ornate chairs. It makes me kind of hungry, and reminds me of an episode of Saved by the Bell where Zack and the gang had to spend the night in a haunted mansion. The moaning is gone. Maybe it was just a fragment of a past memory, like going to the gym, or a long line at White Castle. There's a note on the table:

By the time you read this, you'll have drunk my memory-erasing potion. Don't worry, there's a reason I made you drink it - which for dramatic purposes I can't reveal right now. But there IS a reason. I only hope that as a side effect of the potion you haven't gained a considerable amount of weight. If so, you may be in grave danger. Not only from the evil that haunts this castle, but also from cardiac arrest and other health problems. I'd recommend getting an exercise video, maybe "Bootycize," which features some killer rump-shaking action and great jams.

PS: Make sure it's Bootycize Volume I or II; III features subpar asses and only fair-to-good jams.

As I put down the letter, I hear a creaking noise behind me. I turn around and there's a monster standing in the doorway. It looks hungry, though maybe I'm just projecting my own hunger onto it. Either way, I run. The corridor seems to elongate as I dash down it, as all long distances do when you're fat and not in an automobile. Finally, I reach the door at the end. I bolt through it into a small room that appears to be a pantry. Hoping to find some potato chips, I climb into a cupboard. Seconds later, I hear the monster burst through the door. In an evil, reptilian voice it says "I know you're in here, fatty. Come out, come out wherever you are." My hands tremble and I start whimpering; I'm very sensitive to cracks about my weight. Miraculously, the monster leaves a few moments later. Even more miraculously, there's half a bag of Doritos in the cupboard. I devour them quickly - but quietly, so as not to attract more monsters who might ask me to share them. 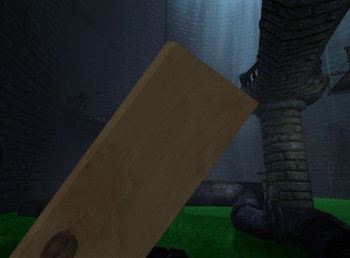 After a power nap, I explore more of the castle. The next room is a cistern with a pool of green liquid in the center. I taste some of it to see if it's Mountain Dew, but it tastes more like medieval sewage or Mr. Pibb. There's a heavy wooden door at the end of the room that's locked. The key is on a ledge accessible via a two-platform elevator; you stack crates on one platform and the other lifts you to the key. Or at least that's the idea. Looking at the elevator, though, it only appears strong enough to lift a 12-stone man at best. Not to mention the idea of lifting crates almost gives me a coronary. I pick up a board and start beating on the ledge, hoping to dislodge the key. Instead, I think I dislodge something in my back. I shout in pain and drop the board, which falls into the pool.

As I'm stooped over the pool, fishing out the board and cursing, I realize my shouts have attracted more monsters. I grab a torch off the wall and wave it at them. "Stay back," I warn them, and then, trying to think of something more authoritative, add "You have 30 seconds to comply." They're unfazed and advance on me. My heart races, both because I'm terrified and because waving the torch is rather strenuous. As I'm backing into the corner, I almost trip over something. It's a VHS tape. I pick it up and look at the cover; it shows a hot array of semi-naked asses. I realize it's the Bootycize workout video. I wave it at the monsters. They seem to falter for a moment. So I wave it some more. 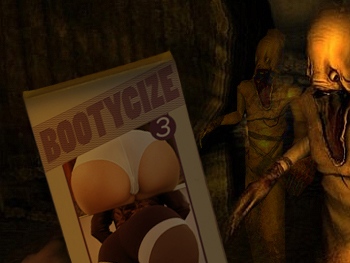 "That's right!" I shout, "Who's got the hottest, jiggiest, most bootylicious workout in town?" The monsters begin backing off. "The workout endorsed by both Essence and Hype Hair, who gave it four out of five stars. If you want calorie-crunching, rump-shaking action, set to 2003's hottest rap groups, look no further than Bootycize! Volume 3."

"They lost their vision after Volume 2," the other monster agrees. They both prepare to lunge. I feel my stomach gurgling; I haven't eaten anything in half an hour. My thighs are making this horrible scraping sound as they rub together. It's not easy being fat.

Thanks to Ian at Fused Muse for making the graphics and confirming "Booytcize" is somehow not a Real Thing.