Mount & Blade 2: The Adventures of Lunk 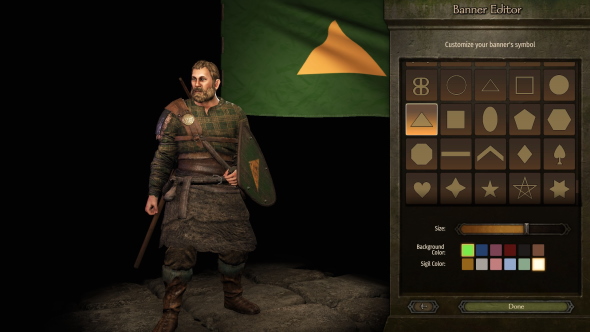 Lunk Galoot and his family crest, The Uniforce

By virtue of one thousand pieces of unearned gold and the fact that my floppy white buttcheeks are planted on the top of a horse, I am a leader of soldiers.

Well, I say soldiers. What I mean is four grubby drifters with spears and more ear hair than combat experience.

And how do I lead these soldiers? By pulling up a command menu and completely panicking as a group of enemy bandits crests a hill bellowing their mighty battlecry of, "Bleargh!"

Shit. Shit shit shit. There are like six different types of order! And each one has a subdirectory of specific orders! A lesser man would be frozen by the overwhelming number of possibilities in the face of mortal danger. I, being a leader, think on my feet.

By which I mean I accidentally tell my horse to move forward while I fumble with the orders. Within moments I am in a field directly between the two armies, utterly alone.

A rock sails past my head. With a dignified yelp, I turn the horse in a random direction and speed up. With the timing of a genius I finally issue the "Charge!" command to my troops just as I run into a tree.

Rocks pelt my back, my elbow, my horse. Jeez these guys really love their rocks. Or maybe they hate their rocks, given the force and speed with which they are being launched away from the bandits' bodies and towards mine.

In a rare moment of introspection, I suppose that this is what it means to become an adventurer. To stride forth upon lands unknown, through the mud and the cold and the insects, and to wring meaning out of this miraculous life by throwing fucking rocks at strangers' heads.

Another rock clangs off my helmet. Awkwardly walking my horse backwards, I note that the battle has begun. Nine filthy idiots pressed against one another - a five-foot clump of elbows and grunts in the center of an idyllic autumn clearing.

What's this? The enemy is so focused on my hired goons that they have left their backs turned to me? Ho ho, the rock target becomes the former-rock-target-turned-hero! As the timeless expression goes.

I ready my bow and arrow. Charging forward at unreasonable speed, I take aim. The chaos recedes as a bubble of calm certainty envelops me. Hands, bow, arrow, target are all one. With a twang I let loose. The arrow sails towards the enemy. And lands in one of my soldiers' thigh.

Flustered, I draw my sword and charge. It's impossible to miss from close range. Always eager to accomplish the impossible, my sword harmlessly whiffs through the air as I pass within inches of all five enemies at my horse's top speed.

Turning my horse around, I charge again. And miss. No matter how close I get to these bandits it's like waving a sausage at the moon.

For my third attempt I charge at the slowest possible speed and hope for a different outcome. The outcome is different. I am pulled from my horse and stomped unconscious.

But in their eagerness to take out history's greatest tactician, the enemy exposed their flank to my soldiers. A few spear pokes in the back later and victory is ours. My men drunkenly cheer and pump their fists in celebration above my broken body.

Just as I planned! 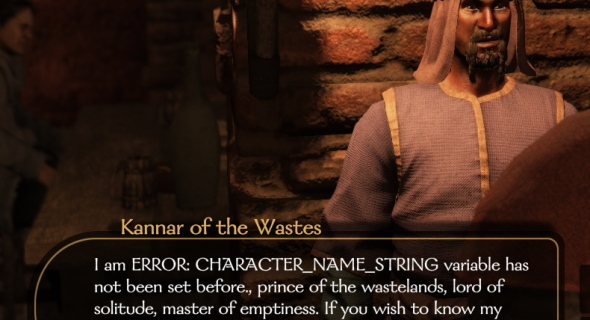 In the coming days I learn a lifetime of lessons. Enough to begin a book about strategy, Lunk Galoot's Art of Lord. If I had to narrow this book down to three principles they would be: