The Mysteries of Thanksgiving Revealed

Another Thanksgiving has come and gone, leaving us all with feelings of contentment and nationalism. We Americans love Thanksgiving, because it is the one day of the year when we can gorge ourselves into a coma and be celebrated for doing so. It is not just our right to stuff ourselves, it is our patriotic duty, and it is one that we gladly undertake. What’s more, Thanksgiving comes with a great sense of equity and possibly even equality, for although people of different sizes and lifestyles eat different amounts in their daily lives, on this one day it seems like every man, woman, and horrible amalgam of man and woman can eat unfathomable amounts without batting an eyelash. People who normally get queasy at the thought of seconds frequently polish off a dozen platefuls on Thanksgiving before they decide to stop in order to leave room for dessert. I’m not a big guy, but I personally have no problem eating enough to feed a Rwandan village when that wonderful November Thursday rolls around. After all, it’s not like the Rwandans are going to eat it. Plate after plate of turkey, mounds of stuffing, bowls of mashed potatoes, bathtubs of cranberry sauce, industrial vats of sweet potatoes with those marshmallows on top – all vanish into the bottomless chasm that is my proud American stomach. 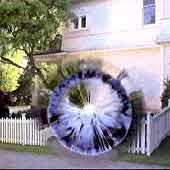 A perfectly nice house, and - oh no! A wormhole!

That was Thursday. Now it’s Saturday, and I’m fucking full. There’s no rational explanation for it. I’ve even been eating lighter than usual to retain my girlish figure. My defecationary habits have been normal, even exemplary. And yet, the very thought of food is repugnant to me. I’m stuffed. My sinuses are packed with food. There is gravy oozing from my pores. But I know that I am not alone. I’ve done extensive research on the subject – up to and including calling my friend Mike – and I’m convinced that post-Thanksgiving fullness is a widespread problem. Fortunately, the finest scientific minds in the internet journalism industry work right here at Something Awful, and together we have found the source of this debilitating and often gassy disturbance. 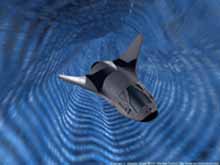 A perfectly nice crappy CG spaceship, and - oh no! A wormhole!

That’s right, wormholes - trans-spatial gateways that make nearly instantaneous travel from one point to another point millions of miles away possible. For years, wormholes have been the wet dream of nerds everywhere, fueling such shows as Sliders and…. uh…. probably some other shows as well. I think there was one in an episode of Star Trek, or so the pictures I found on Google have led me to believe. Wormholes have been popping up everywhere ever since they were discovered by Albert Einstein, or Kaiser Wilhelm, or Vidal Sassoon, or some other foreign person. The media loves wormholes. Every time a new science fiction movie comes out, Hollywood loads it up with wormholes. These days, people will tear rifts in the fabric of space-time for any old reason. The point is, wormholes are everywhere. Now, I know many of you still have questions, such as, “Gee, Ben, how do wormholes affect my dietary habits?” or, “Gee, Ben, why do wormholes make me full two days after Thanksgiving?” or “Gee, Ben, you were really reaching for a topic for your article this week, weren’t you?” Yeah, well, shut up and let me explain. I’m visiting my parents for the holiday and all I brought with me for my article was a few crappy pictures of wormholes. Now, let me explain about my theory. 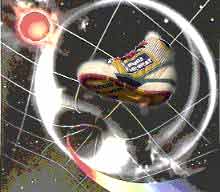 A perfectly nice random high-top sneaker floating in the middle of a crazy space grid, and - oh no! A wormhole!

Normally, when you eat something, it goes through your digestive system the way you may have learned about it in school. I, for one, never learned about the digestive system in school, and thus I assume that the little pieces of food are carried out of my stomach by an industrious race of tiny, invisible elves. Maybe I’m right, maybe I’m wrong. I don’t know. I’m not a scientist. But I do know that on Thanksgiving a wormhole opens inside each and every one of us. Maybe the elves open them. It’s possible. They’re an amazing people. There is no limit to the amount of matter that can travel through a wormhole. As food enters your body, it is transported to another point in space. Where, exactly? That much, I’m afraid, is a mystery. Maybe I’ll figure it out sometime when I’m not so damn full. And so, you can continue to shovel turkey down your food hole like Lowtax in a buffet line without bloating right out of your Old Navy cargo pants.

A perfectly nice diagram of a wormhole, and - oh no! A wormhole!

When you send sixteen helpings of Aunt Bea’s corn pudding through your own personal wormhole, it has to end up somewhere. While I may not know that precise location, I can hypothesize that whoever is on the other end of that wormhole doesn’t want your partially digested food any more than you do. Newtonian physics states, though, that to every action there is an equal and opposite reaction. In this case, the reaction consists of all that food being sent right back through the wormhole and into your unsuspecting stomach. And so, days later you find yourself bent over a toilet bowl, barely able to move, desperately trying to expunge at least some of the food you ate on Thanksgiving.

So there you have it – the root of one of the largest problems facing our nation today is identified at last. It wasn’t funny, it wasn’t useful, but I identified it, damnit. Of course, that only raises a slew of new questions. Perhaps even more than a slew. For instance, now that we know what’s causing the problem, how do we solve it? What other applications can these wormholes be used for? What gives our bodies the power to alter the shape of the cosmos in order to create these wormholes? What the hell was I thinking when I started writing this article? I mean, really, what could have possibly been going through my head? There are so many questions. The only answer I can give you is, hey, no one here at Something Awful can produce comedy gold every time. I mean, just look at Zack, or transvestite David “Honeysuckle” Rogers, as he used to be known.