Exclusive Bald Eagle Wall Decor with Wolves Racing Across Wingspan of an Eagle! 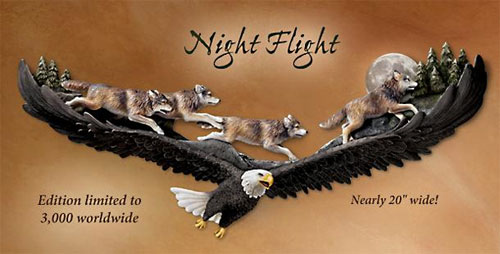 From a scientific standpoint, I would postulate that what we are seeing here is a symbiotic relationship. The wolves are probably there to clean mineral deposits off the back of the eagle, and the eagle in turn has an elite commando unit it can deploy in order to conquer larger enemies. I am not yet certain if the eagle is really big, or the wolves are just really tiny. Either way, it makes for one hell of a predator.

I can't think of a more frightening image for a terrorist to see than an American eagle swooping in to deliver its cargo of ravenous, terrorist-hating wolves. There is no greater symbol of American values than the despicable eagle, and no greater symbol for the people we conquered and took America from than the predatory wolf, so that's like a double whammy of deadly American symbology. I suspect we'd turn the tides of war if we figured out some way to make this happen in Iraq and Afghanistan, even if we had to cheat and glue some smaller dogs to an eagle, or paint a small plane to look like an eagle and strap some wolves on it.

When and if the End Times come, the sky is going to be filled with horrible nightmares not unlike this. You know, wolves riding eagles, gorillas throwing ornery hogs off buildings, hippos with bats in their mouths, etc., etc.

There is always the possibility that I'm reading too much into this piece. It may just be depicting the altogether common situation in which an eagle flies between a small canyon and wolves run across using its wings as a makeshift bridge, with no intention of cleaning mineral deposits off or even utilizing it as a long term transportation solution. Still, who would want to even capture such a benign and common event in statue form? It's got to be something more. 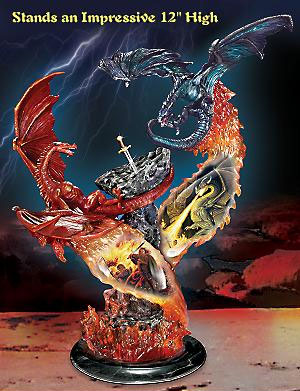 Double Dragon was a pretty fun game back in the day. I don't think there was anything resembling a point to it other than to wander the streets bicycle kicking lesbians and whipping people. Although, there was that time when you were in a helicopter and somehow there were like 40 guys crammed into the front of the helicopter and they would come out to fight you one by one like it was some sort of clown helicopter. That was pretty great, at least up until Abobo showed up and you had to stop messing around and get serious.

What I'm trying to say is that there comes a point in life when you are in the back of a helicopter and you've just been tossing punk after punk out the open door without any hassle, then suddenly this huge dude comes out and you start to realize that you could easily wind up like one of those helicopter-defenestrated punks if you don't start taking life seriously. Up until now this has all been fun and games, but this crap has to stop before we degrade humanity any further.

This huge ridiculous sculpture depicts two dragons that are either getting ready to kill each other, or getting ready to perform the physical act of love. To be honest, it's kind of hard to tell what exactly is going on because the artists, the world renowned Hildebrandt brothers, are apparently 12-year-olds with ADD. I think the dragons are either shitting fire, or the fire is reaching up to give them some kind of magical enema. For reasons beyond me, you can see a picture of two heroic humans and also another dragon in the fire. I can understand the fiery depiction of the humans, since that serves to remind the viewer that somebody out there might want to claim the mysterious sword in the middle of the figurine. I don't know what the depiction of the other dragon is for, since there are already two dragons getting ready to go at it. That third one is really one dragon too many. Fire is pretty intense by nature, so there is simply no justification for painting monsters on the side of it.

I don't know if the red or blue dragons have any plans to try to claim that sword in the middle, but I kind of doubt it. What's a dragon going to do with a sword? If that were a big thing of French bread instead of a sword, I'd wager a pretty penny that they were fighting over it. As is, it seems like it would be in the best interest of both dragons to team up and protect the sword, lest some hotheaded human procure it and then stab one or the other.

The biggest problem for me is not that this is an utterly pathetic piece of shit, but that it's an utterly pathetic piece of shit that you can't in good conscience display anywhere. Where on earth do you put a thing like this? Unless you have some sort of Altar of Virginity built in your basement, there is no appropriate place for such a monstrosity. And if you can think of one, please do me the honor of punching your own stupid face as hard as possible.