I recently moved to San Jose, CA, the black heart of Silicon Valley, America's leading producer of industrial grade silicon. I had a lot of reasons for moving: a new job, a change of pace, and so on. But the main reason I moved was the prospect of getting to decorate a new apartment.

I plan to fill my swingin' bachelor pad with merchandise from the Bradford Exchange, the premier source of things with eagles, wolves, Jesus, and dragons emblazoned on them. What better way to live than to be surrounded by the soaring symbols of America's pride, history, and ingenuity? Aside from being locked in a centrifuge filled with cotton candy and lesbians, I cannot imagine a superior way of living.

Naturally, I also plan on acting out the final days of Daniel Plainview's life by staggering around in a drunken stupor shooting my possessions, so I wouldn't dare buy anything worthwhile. That's why I love the Bradford Exchange. They make the kind of stuff I would be happy to buy and then immediately shoot with a rifle while screaming at the ghosts of my past.

To give you a better idea of the kinds of things I love shootin' at, here's a brief rundown of my next few purchases. 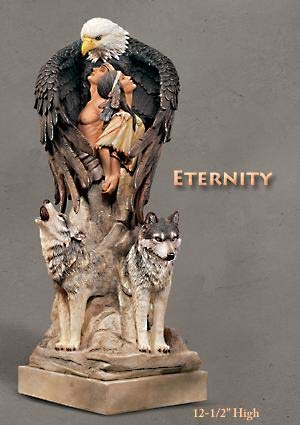 Nothing says romance like being cradled in the wings of an eagle and surrounded by ravenous wolves, one of which won't stop howling. I have to wonder if this Lee Bogle character even knows what the word "romance" means. Judging by this sculpture, he has at best a very vague understanding of human intimacy. Usually romance doesn't involve a man and a woman standing back to back. It also does not traditionally incorporate a pair of howling wolves or an eagle. Maybe this guy honestly doesn't know anything about romance, human courtship, or reproduction and just kind of guessed.

I am not ashamed to admit that, in a situation such as the one depicted in this piece, I would suffer from performance anxiety. I mean the girl is hot and all, sure, but couldn't we go somewhere more private? The wolves are just kind of standing there and it's like that eagle is trying to get in on the action. Plus, is that one wolf going to howl the whole time? It's kind of throwing off my game.

The Bradford Exchange is no stranger to terrible cookie cutter memorabilia. We've established that fact and beaten it beyond recognition with the severed limbs of a dead horse. They'll stick any license or art on a model train set and sell it. But there's something about putting Star Trek on a model train set that is uniquely tragic, like a newborn baby dying of a broken heart.

The idea of sitting there in your dark basement amidst your model trains watching your little light-up Captain Kirk car go around in circles is as depressing a notion as any. I'm no Star Trek fan, but wasn't it a show about mankind reaching for the stars and conquering the final frontier? How sad that such a grand endeavor has been reduced to existing in the small space allotted on the side of a cheap model train. Then again, maybe you buy this thing, hook it up, and it instantly crashes into a subspace anomaly and you have to jettison the miniature fake diesel engines and it's totally awesome. But even then, I doubt this train set is considered canon.

To boldly go... off the tracks.