The unstable relationship has started to collapse. The abandoned battle has been picked up by a new generation of hair, a generation that is not afraid to sacrifice itself (and it's host) for the sake of whatever hair wants. The longstanding agreement regarding hair territory (chest, pubes, ass, the area between pubes and ass, head, 80% of face, some arm and leg, toes, top of feet, top of hands, fingers) just wasn't enough anymore. For greed or growth, hair has gone all Israel on me. It is invading the last remnants of my once abundant stretches of skin.

However, this new aggression wasn't a slow process, but an undeniable declaration of war. Like Caesar crossing the Rubicon, the hair crossed my boxer's elastic waistband from the asslands to the lower back. Even worse, already established hairs are getting a new, thicker coat. As if the previous were some sort of baby hair, waiting to be replaced with big-boy fur. The first few signs are harrowing, but the hypothetical future of my body is simply terrifying. Look at this graph. 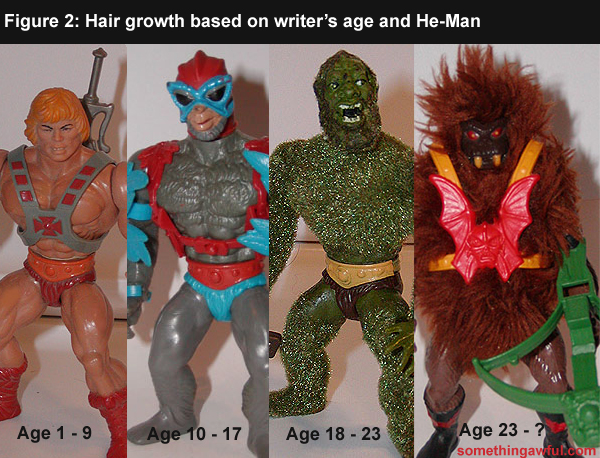 As you can see, the changes are drastic. Just a few months ago I was a happy Moss Man, but now I'm transforming into Bat Wolf or whatever that last toy is. Like a patient diagnosed with a terminal illness, my body is plagued with faults and it is only getting worse. Ingrown hairs appear on the border zone between the skin and hairy, as new follicles force themselves upon the hairless. The battles are constant. If the spread of the infection was not enough, long-standing hairs have begun sprouting multiple hairs from the same pore. Three hairs, one hole. It's hardcore pornography for the epidermis.

Though it is still in the first stage of infection, the overall change is frightening, and worse yet, there is still no cure. I wish I had the motivation to struggle, but I feel rather helpless. My body has chosen my path, and there is little I can do to change it. I won't be president, I won't even be a teen wolf, but I am destined to be an unemployed, pathetic twenty-something wolf. If there was someway I could donate a small amount of change (no more than a cup of coffee a day) to rogue anti-hair scientists or pick up a razor and armor and prepare for battle against the hair, then I would fight; however, since those are neither real nor believable, there is nothing I can do except mope. The best I can do is try and wait out the confrontation for as long as possible, hoping that it will be over before I am completely worn out. Like a family in an attic, waiting for the enemy force to wane, or maybe more like a person who has to poop really bad, but wants to finish one last thing before sprinting to the bathroom-- if only I could hold out for a few more minutes, maybe everything will calm down on it's own. For now though, a damaged optimism is all I have, well, that and a full fur coat.