I Fought Raccoons and Raccoons Won

I have the good fortune of living in a suburban part of Chicago where my backyard fence literally marks the start of a forest preserve. On the other side of that fence are many acres of woods that provide a home to a wide variety of wild animals. This is convenient, because I like looking at nature, but I hate being inside of nature. Unfortunately, I made a stupid rookie mistake.

Every year I see deer, squirrels, all manner of birds, chipmunks, possums, and raccoons. Most of these animals make fine friends to have living nearby, but not raccoons. Many parts of the USA and Europe are home to raccoons, but if you are not familiar with these unique animals allow me to explain. 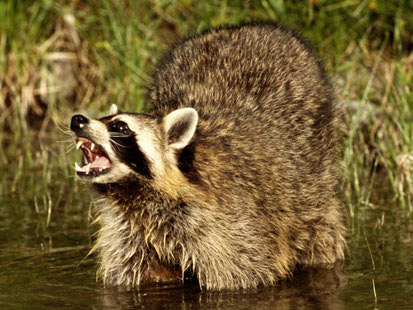 A raccoon is a tiny, evil, adorable bear with human hands. They are handsome in appearance and can even seem cute, but they are hateful rascals. I have personally watched raccoons climb a tree to a bird's nest and throw the bird's eggs out of the nest. They did not eat the eggs; they threw the eggs on the ground. I was far away, but I'm willing to bet they were laughing when they did it. 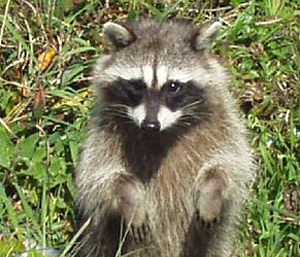 These filthy hands...Raccoons can open anything. The raccoons that live in the nature preserve behind my house started by opening my bird feeder to get to the bird seed. That is a pretty rational thing to do if you are a tiny bear with human hands. I didn't care too much. After all, what sort of asshole has a bird feeder?

The next thing the raccoons opened was a garden hose and a container of lighter fluid. The lighter fluid they opened and dumped all over my back porch. I do not think raccoons eat lighter fluid, which leads me to believe they were attempting to burn down my house. The hose they chewed like a giant licorice rope, possibly in an attempt to put out the fire the other raccoons were trying to start with the lighter fluid.

Once they had finished with everything sitting on my porch, the raccoons methodically shredded my screen door on the back of my house. It was a laborious undertaking and they worked every night while I was sitting and watching TV five feet away. It would begin with a light banging, which might be too quiet to hear if I wasn't paying attention, but it always escalated quickly to a loud ripping sound like you might hear if you stuck your human hand through a screen door and started ripping it.

Maybe the raccoons thought I wanted them to shred my screen door and that when I heard them ripping it open I would leap to my feet with joy. After dismantling the bird feeder maybe they assumed everything was full of bird seed. Maybe they just wanted to come inside.

I do not know if they expected me to be so happy upon seeing a giant raccoon climbing seven feet up the back of my ruined screen door that I would rush to bring bowls of food and more bird seed. I would usually shout at them and bang on the glass, which would make them oink like pigs. 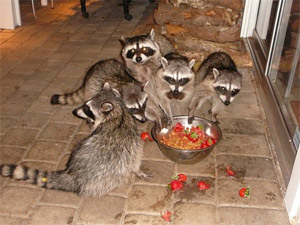 Here it is. The worst idea ever.Another fact I failed to mention earlier about raccoons is that they do not give up. After several days of tearing the dickens out of my screen door they moved over to the window screen adjacent to the couch I was sitting on while watching TV. You know those big brown beetles you get in the summer that make a racket flying around and climbing on your screens? Imagine that, only weighing about 20 pounds and oinking like a crazy pig.

That was about the time I made a really, really, really bad decision. I started throwing my garbage out the back door. Not wrappers and paper, I mean old leftovers and food that had passed the expiration date. It was an act of desperation, but for a while at least, it worked. The two raccoons that would come by were easily placated by a few old bagels or a handful of spaghetti noodles left in the strainer.

Then they started having babies.

In my defense, as stupid and oinky as big, fat adult raccoons are, baby raccoons are the opposite. Raccoon babies have evolved an ability to look like they are going to cry at all times. They would stand there on my porch, huddled up in a ball, and look at me with these watery, black eyes. They were just waiting for a morsel, just a little crumb. 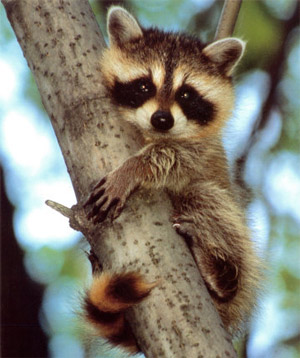 Do not believe their lying eyes.The logical part of me knew that feeding wild animals is always bad news, especially in your backyard. The illogical part of me is a big soggy pussy and it saw baby raccoons and the widdle guys wooked sooooo sad!

Out went the bad yogurt, the old grapes, and the bruised apples. Out went old pasta and pizza, casseroles and stuffing. The only thing the raccoons refused to eat was broccoli. Anything containing broccoli would always be found the next morning with just the broccoli, picked clean like a broccoli skeleton.

The raccoons were not good dinner guests. They would throw the dishes all over the yard, fight each other over choice pieces of old pizza, and generally make a ruckus that I am certain made all of my neighbors hate me.

One family of raccoons became two and then, one night in fall, three. There were eleven raccoons on our back porch at once, oinking and jockeying for some cereal. To make matters worse I had long ago crossed into the territory of giving them fresh food I didn't like. If I was tired of Cap'n Crunch or some other food I would throw it out to the raccoons. They also made quick work of my least favorite leftovers.

Finally, old man winter chased the raccoons away. Winter often has that effect on invading armies. Fat on their ill-got meals, the raccoons are sleeping it off somewhere in the forest preserve. Believe me, I consider myself lucky that they didn't choose my chimney or attic to make a home, but I'm only half as stupid as I look. They'll be back in the spring demanding a meal.

I'm open to suggestions, but I'm not completely defenseless. I think they might be in for quite a surprise when they meet my dogs.