REPLIES TO THE MEDIA FANS 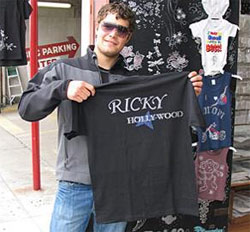 The media fever is spreading and ricky says don't relax, start fist pumping.What the H-E-dubs is up people?

Lot going on in Wasilla. Tank flew up to give me some papers I had to sign and notarimes with this bitch called a notorepublican who works out of the hardware store. Tank also brought up the laptop dell gave me when I went to some birthday party for some fat girl daughter of like the vp of dell. I didn't even know what the fuck that was I had to hug her and then I got drunk and took a shit in their bathtub.

Anyway I got that shit hooked up so I can finally go on and check my email again and what the fuck I have all sorts of emails from the media and shit about the media in my email box. And I'm like tank what the fuck you're supposed to handle this shit and he started in with some bs about passwords and so I just told him to get me some wendys.

So I figure why not kill two birds with one shotgun bullet and put my responses to the media shit in the article so yall can read it too. Saves time that way.

First email came from some aol broad honestly I thought they stopped making aol in like 1998, but whatever.

I'm always up to do some promo shit if it will help the old ricky hollywood with some boosts. Plus she sounded hot in her email and I bet an email girl is a total slut.

I just emailed her so I will let you know when she puts up her article.