They Built It, We Can Destroy It 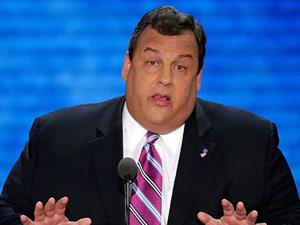 This reverence for social mobility is belied by the Republican platform. Romney's budget guts medicaid and a litany of assistance programs for the poor to underwrite major changes to the tax code that would shift the largest portion of wealth to the already wealthy. These programs are the exact programs that helped past generations lift their families out of poverty. Republican governors across the country have scorned public transportation projects out of pique. Stimulus money for rail lines was proudly refused by some, appropriated by others.

As Clint Eastwood doddered out on stage and accused a chair of being "absolutely crazy," anyone watching the freak show knew we were in for a wild ride. Eastwood seemed to blurt out that Afghanistan was a mistake and the crowd cheered as if forgetting the wars were authored by Republicans. Minutes later Romney would practically burn an Iranian flag on stage. 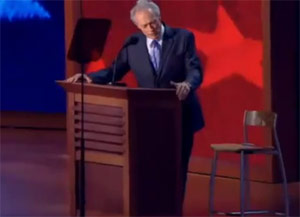 Eastwood bumbled about the past, but it took Rubio to bring back the strains of nostalgia for the American dream where hard work can pay off. He talked about his father escaping Cuba and working super duper hard to make a better life for his son. It was, honestly, almost a little bit touching. Too bad the idea is at odds with the Republican's id-fueled desire to dismantle that dream for future generations.

Every few minutes at the convention a second- or third-generation beneficiary of hard work and upward social mobility blamed Barack Obama and the caricatured government as ineffective or even dangerous. Not "George Bush doesn't care about black people" dangerous by inaction. This was the real, round-up-your-guns, FEMA camps and death panels sort of dangerous that exists only in the gusting fever dreams of liberal fascism that populate talk radio and guide the Republican party like a cartoon following the smell of a windowsill pie.

Meanwhile, Republican governors systematically gutted unions - a historic engine of mobility for the working class from the poor to the middle class - slashed wages and laid off swaths of public employees. Any mention of the increasing gulf between the rich and the middle class - an objective fact - was deemed "class warfare." 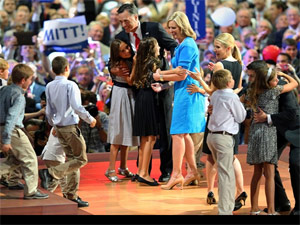 All the while, a state-by-state effort to enact strict voter I.D. laws under the pretense of fraud prevention became so dastardly Pennsylvania Republicans were caught on camera admitting the whole point was to give the state to Mitt Romney. Ohio Republicans were caught attempting to extend voting hours in Republican districts and curtail them in Democratic distracts. In Florida, elderly WWII vets were being thrown off the voter rolls. Not exactly Norman Rockwell shit.

Which brings us back to the Romneys, the Reagan-perfect hero family, not robots at all. Real human beings, as proven by Ann Romney's MS (thankfully cured by dressage horses) and a Duggarsful of grandchildren who apparently have pizza parties without plates, napkins or beverages. Paul Ryan's infamous speech full of fibs and the whole premise of "We Built It" being based on an edited clip of Obama? Don't worry about that. That stuff doesn't matter. The Romneys are real people.

We have seen the best the Republicans have to offer. Now it's up to Barack Obama and the Democratic Convention to make us forget what a mediocre President he has been for the past four years. Here's a hint how they're going to do it: by scaring the shit out of us about the Republicans.

Zack Parsons is the author of Liminal States, a sci-fi/horror novel about bugs and America, and a frequent headline contributor to Drudge Report under the pseudonym siren.gif.