HELLO!!! Happy Halloween From Me. Its an early hallow’s ween wish to you but it is late for me, I have been getting ready for several months to capitalize on the creepy craze!! I have put some money into my project “The Haunted House for Horses: The Horse Hearse Chronicles 2K10 Too Hot For Horses” this project comes from a novel i wrote in which a horse kept calling the house phone and there was no way to stop it because it was also the top cop in town (Huge story and very complicated, to cut costs they sold half of the city hall and it was made into a stable, which is how the horse became involved in city politics. Mayor horse [different horse] embroiled in scandal in which horse went through puberty, city up in arms over horse with erection at events, it was on the news in the story) I think there might still be time for you to make your own Horse House If You dare. My famous attractions include:

Man Yelling Sounds will make the horse listen up while you pull a lever to make the large animatronic Mans Mouth go up and down, expressing dissatisfaction with the horse and the things it does. The 8-foot-tall man head lights up and scares the daylights out of a horse while you use the hidden microphone to shout 8 different things according to the script: "I Hate You Horse!", "Horse Filth!", "I Am Disappointed In You", 3 different groans, a puke noise, and one scream. Keep the horse moving so it doesn’t figure out the giant human head is fake.

Witness To A Murder

It’s a rough town and you are the only horse in the stable this eve. Using your horse eyes you see through to the old farmhouse where a crime is happening, but you are too big and loud to go stop the crime. So you watch closely looking for clues and then... Murder Happens. The scary part is when the man from the Witness Protection Program tells you that your new name is Ass Pumper and there’s no way to change it. 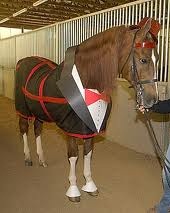 It might take a horse only 12 seconds to eat a human’s dinner but maybe that’s what’s gotten into you when you Watch Old Woman Eat Barbecue. Messy Laides slurp and chew and mash up the meat bits with their old tongue and lips for 35 minutes or more. Horse terror at the slow eating women (Nutrients eaten / absorbed at very slow rate = The Stench of death to a Horse, terrible fear in the animal kingdom)

This is pretty much just a hearse that you park out somewhere that the horse can see it, then you explain that “This Hearse Contains The Body Of A Bad Horse Who Just Wasn’t Having It” and then have someone shake the hearse and make thumping noises like the dead horse is trying to get up and bump around. Your horse (alive horse) will start to lose it and get scared but hold on tight because the best part is yet to come when you throw a road flare into the back of the hearse and all the stagehands come out and say Happy Halloween The Bad Horse Is Dead, It Had VD Also