If you haven't heard of Torchlight, you owe it to yourself to check out the demo. By far the best action-RPG since Diablo 2, and only $20. A few guys from Runic have been active in our forums, answering questions about the game for months and generally being nice as hell. I'm not being paid to say any of this, but I can only assume that if enough of you buy it I'll be hired as the company's lead writer.

Gearbox stressed that they had top men dedicated to Borderlands' PC interface. After all, navigating menus with a controller is totally different than using a mouse, which - unless you have one of those fancy obstacle course mouse pads - can theoretically position a cursor anywhere on the screen almost instantly.

"We have a separate set of guys who are entirely focused on the PC version. Lots of games that are multi-platform don't account for the mouse, in the menus, in the inventory screens, and the rest of the game.

(...) We understand what people expect on the PC. With Borderlands, it's different. We're not porting the game to the PC, we're starting there."

And here's the first thing you see in the PC version after sitting through the mandatory hour and a half of company logo movies: 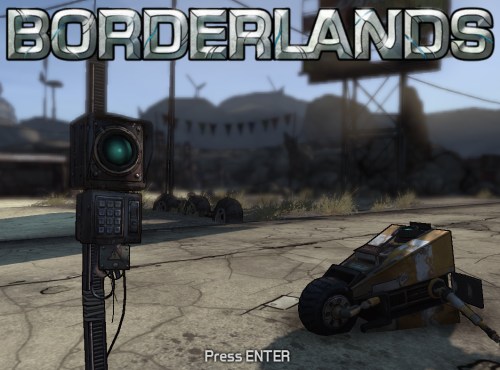 Hitting the Enter key doesn't take a herculean effort, but in just about any other game this pre-menu screen wouldn't exist, and if it did you'd have the option of slapping any button or at least clicking your mouse to advance. You can't click a lot of UI elements that you'll be using 87 bazillion times throughout Borderlands, nor can you scroll through text with anything but the Page Up and Page Down keys.

It's a shame, really. The game is quite amazing once you get past the cumbersome menus, search for a way to disable mouse acceleration, then do another search to adjust the field of view so you feel like you're playing as a human with two eyes instead of a cyclops with horse blinders on.

Unfortunately, this isn't the first time a multi-platform game has promised to deliver an intuitive PC port and then completely failed without having appeared to try at all.

In 2007's fps incarnation of Shadowrun, mouselook was not supported at all. Players had to aim exclusively using the keyboard, with Scroll Lock bound to turn left, Tab bound to turn right, that little key with the menu icon and a mouse cursor between some keyboards' Control and Windows keys bound to look up, and nothing bound to look down.

Then there was the PC port of Sonic The Hedgehog, which was so poorly made that they didn't bother to include Sonic. I want to say he was replaced with a green rabbit wielding some sort of caulking gun. Made no sense at all.

Who can forget the debacle that was the Mass Effect PC launch? Not only did ALL of the main character's conversations have to be typed in, but his good/evil alignment depended entirely on the player's words-per-minute rating.

When Grand Theft Auto 3: Vice City was finally released, it seemed like everything you could hope for in a PC port. The textures were a little sharper, the draw distance was a little longer, and the aiming was more accurate. It was only when the first players reached the ending that they realized the entire game had been N.A.R.C. running in fullscreen on the NESticle emulator.

Perhaps the worst offender of sloppy porting was the PC version of StarCraft 64. It didn't come with as many maps as its Nintendo 64 predecessor, was missing a split-screen multiplayer mode, and was prone to actually being pornography if you downloaded it as a 15MB file called "real_Starcraft.iso".

Borderlands
Really fun - if not as potentially replayable as it could have been if there had been more to item personalization - once you overcome some technical hurdles, but "we're going to delay the PC version for one week to... optimize it" was douchebag liar speak for "we're hoping that impatient customers and pirates will buy the more expensive console version" and this is my longest one-sentence review of all time. 8/10

Torchlight
If you skip this just because it's a single player game, you will effectively be kicking yourself in the balls with Berserker's Boots Of Strength (+10 Resistance To Experience Outside Of Comfort Zone). 10/10

Tropico 3
Somehow, somewhere, Elian Gonzalez is playing this with a knowing smile as Fidel Castro shapeshifts into an owl and perches on the young man's shoulder. 8/10

Dreamkiller
This is such a throwback to a time when games could simply be hallways with enemies that I'll openly admit to (really, seriously, not kidding at all) making the David Letterman skin included with the Quake 2 Super Male character model back in 1998. 2/10

Forza Motorsport 3
I'll concede that this is very well made, I just find these sorts of games too racey - oh ho ho! 8/10