THE NEWS MAGAZINE OF THE COMPUTER SCREEN, VOL. 3 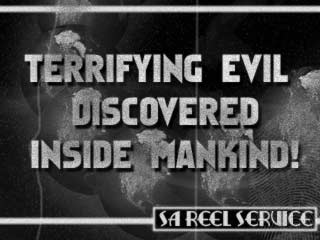 A private scientific investigation into the inner workings of man has discovered a horrifying parasitic presence: skeletons! Terrible bony facsimiles of human beings are buried just beneath our skin and muscle, less than inches from murderous freedom!

The world is up in arms! Just who put these ghastly creatures inside us? Men, women, and children everywhere are clamoring for answers, afraid of the menace posed by the monsters within!

Dr. Thomas Spiderhands, a rare coin collector and leading expert of human physiology, thinks he has the answers! "I suspect that, at one time or another, each and every one of us has eaten a skeleton egg, allowing it to hatch and grow inside us."

"For now the skeletons are asleep," claims expert skeleton theorist Dr. Alvin R. Hunter. "But if we move too fast or too deliberate, they will be stirred. We must steady and conserve our movements. Each motion must be gentle, like rocking a baby. A terrible, terrible baby housing a monster of untold evil."

The Mayor of Schaumburg, Illinois has a more ambitious plan. "My citizens are voluntarily marching into our vast tar pits. I will follow them into the murky black and the menace shall die with us."

Meanwhile, world Leaders gather at Coney Island to discuss a plan of action. "We are now our own worst enemies," said the President of Luxemburg, desperately trying not to move too fast when talking. "All we can do is be still and strong and hope that our resolve is enough to hold the demons at bay."

The threat is not limited to just humans. Should the unthinkable happen, mankind may have to contend with bear, dog, elephant, and horse skeletons as well. 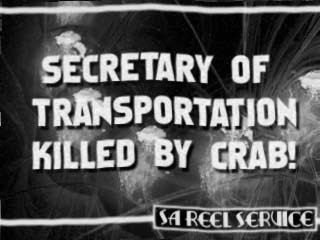 Soldiers fired bullets at the foul creature, but its reinforced carapace simply deflected them as it sunk back into the sea with half of our beloved Secretary in tow.

America's leading Aquanaut vowed vengeance from a nearby pier. "If the sea entire must come to a boil," said Captain Augustus Barnacle, "so be it."

The Joint Chiefs of Staff refused to reveal whether or not this was the work of the Communist Claw, the Soviet's secret genetically enhanced crab. Earlier, possibly another giant crab tried and failed to abduct Rosa Mayweather, Hollywood starlet and wife of the Secretary of Transportation.

"It may just be a very jealous crab of considerable size and heart," said famed carcinologist Eubanks Hemhauer. "It may be the greatest enemy America has ever faced."

What amazing secret was the Secretary prepared to unveil? Whatever this profound and momentous revelation might have been will remain a mystery forever. Nautical enthusiasts everywhere frown. 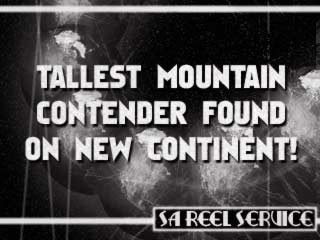 Intrepid explorers have found what might well be the tallest mountain in the world, a mammoth comparable in size to Everest! The new mountain, nicknamed Mount Agnew in honor of former Vice President Spiro Agnew, is located on the newly discovered Pacific Continent, estimated to be about the same size as Asia and just west of Mexico.

The new continent promises a new age of discovery for Americans. Already explorers have made contact with peaceful populations there, some nearly identical to those found in the Far East and Russia.

"They have technology not unlike ours," reported one geologist who recently returned from an expedition to the new New World. "They were very surprised to see us and polite, though seemingly annoyed at times. They asked us if we were lost and what we were doing. After a great deal of pressure, we got them to trade some artifacts of their culture in exchange for blankets and corn seed."

In the event this new land could be dangerous, America is taking bold precautions to keep its bright and plucky citizens safe! A great seawall now finds itself under construction by the military. "May this wall hold the Pacific advances at bay," declared Admiral Chomper. "May it also thwart any attempts to kill our leaders by way of enlarged crustaceans."