In Defense Of My Incredible Science

Ladies and gentlemen of the board. Greetings. Mom, Dad, thank you for showing up. Your "We Love You" banner does not come anywhere near the measurements that I specified. Holy shit, you guys. Not even close. Still, your hearts are in the right place, and I reluctantly acknowledge that.

Upon learning that I had been summoned to the International Scientific Methodology Board, my initial reaction was excitement. What an esteemed organization! Such a storied history! There would certainly be complimentary donuts for visitors. That proved to be the case, though a lack of crullers in the shape of DNA helixes tempered my enthusiasm somewhat. 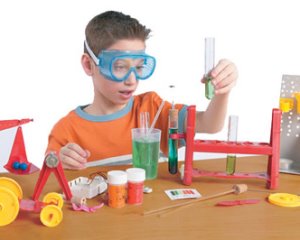 Oh, I applied many times over the years, but I never received so much as a form letter or a Junior Scientist Kit and a word of encouragement to keep trying. And I really wanted one of those kits. If you have some under the table or in storage somewhere, keep that in mind. Eventually I took the hint and began conducting experiments on my own. Those scientific spelunkeries have undoubtedly come under scrutiny, as true genius often does when viewed by those who are too narrow-minded to understand. Consider this an explanation of my experiments, rather than a defense.

My first act as a rogue scientist was to tell a horse that it had, in fact, been adopted. I noted its behavior for a good three minutes. During that time, I was able to determine that my stopwatch was functioning.

For my next experiment, I spent several months assembling a contraption that looked like a robot, but was in fact a bundle of spraypainted cardboard tubes glued together, with a wad of tin foil as the head. This was an attempt to verify a hypothesis that my neighbor across the street harbored ill will toward robots, and would attack one on sight. Unfortunately, the results were inconclusive. Instead of leaving the robot in my front yard where my neighbor could have seen it, I had accidentally stored it in my attic. One night I awoke to the sound of my neighbor in the house, cursing under his breath. He had broken in and crept up on the robot, ready to pounce. I must have scribbled my notes a little too loudly, as he became aware of my presence and jumped out of a nearby window. I'm almost sure that he would have attacked the robot, but now we will never know.

Then came the project that undoubtedly put me on the map. Blindfolded, I tasted three equal portions of ketchup. I had poured all three from the same bottle moments earlier, and was able to determine that they were all pretty much the same. More importantly, I verified my theory that I would forget to remove my blindfold for several days.

After that I became something of a rock star. Puffed up with confidence, I took on my biggest experiment yet, setting out to prove that the unit of measurement known as the centimeter had, in fact, been getting smaller. My methodology was airtight. Placing a ruler on a flat surface, I took out another ruler and measured the size of a centimeter on the first ruler by comparing it to a centimeter on the second ruler. My findings confirmed that they remained exactly the same as one another. However, since both centimeters would be identical if all centimeters shrank at the same rate, my position was backed up.

The centimeter experiment had been quite an exhaustive undertaking. Needing a change of pace, I hooked a bunch of sensors up to my body and watched three hours of professional wrestling. The result was exactly what I had predicted. All the machines made annoying beepy sounds and it was really hard to concentrate.

Each of these endeavors marked me as a danger to the scientific establishment, which suppresses new ideas at every turn. It wasn't until my recent breakthrough, however, that I was summoned here.

I'm not sure if any of you have heard of this, but a mere child in a local middle school recently discovered that if you hook a potato up to a light bulb, the potato will power the light. Inspired by the lad's ingenuity, I made my first foray into the field of potato sciences. After cutting a hole in one potato, I crammed the small end of another potato into said hole. Think about what this bold move signified. If one potato had energy, and another had energy as well, then combining the two would create a field of compounding resonance. Unlimited energy. As far as I could tell, it worked. Of course, tapping into that energy to test it would have stopped the cycle, so there was no way to know for sure.

These are the acts that I willingly admit to committing, science in the first degree. If that makes me guilty in your kangaroo court and you sentence me to death, I will go along without a fight. All I ask is that instead of executing me, you execute this statue of myself that I made out of spraypainted cardboard tubes and a steak for the head. It's at least twice my size. Won't killing something that large do more for your cause than ending the life of a normal sized man?