A Taste of Seattle 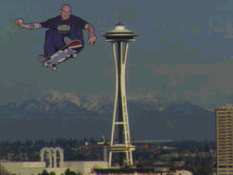 Having lived in Seattle for a grand whopping total of, oh, four weeks, I feel I have become an expert describing this fair city located along the majestic Oregon coastline. Although I may have only resided here for less than a month, it feels like I have been living here for at least a month and a half. This, combined with the fact that I run a webpage, instantly makes me an expert on the subject of Seattle, Idaho. I mean, it's not like they give webpages to just anybody. Think how big a cesspit the Internet would be if any random slackjawed cretin could sign up and instantly get webspace! There would probably be tons of sites devoted to backyard wrestling and AzN PrYdE, not to mention Bionic Commando erotic fiction. No more Internet for me, thank you very much! I'll have another heaping helping of television and a side dish of AM radio! Hold the commercials and pass the witty commentary! Ha ha! What was I talking about again? Oh yeah, Seattle.

Although key governmental agencies would like to tell you differently, there are actually only a handful of jobs in Seattle. As far as I can tell, these are the only open positions in the entire city:

Person who cleans up after people who make and sell coffee

Guy who drills holes into random sections of downtown city streets and then stands around and frowns at them all day long, blocking traffic

Police officer who stands around hole-drilling guy, attempting to wave oncoming traffic into the holes

While the first five jobs may seem exciting and interesting, most people in Seattle seem to choose the last profession for the freedom and expression that accompanies it. For example, people who sell coffee all day long probably have to wear pants. Crazy homeless people are not forced to confine to this type of stifling rule. Every aspect of the job is a series of wild cards; one day you've got a king in your hands, and the next day it's a goddamn worthless two of clubs. As you can tell, crazy homeless people don't even have to abide by simple analogies, proof being the spectacular failure that was my "wildcard" comparison. Let's take a look at the most popular types of crazy homeless people that I have encountered in Seattle, so you too may soon find the psychotic job of your dreams.

Near the Pike Street Market, between the stand that sells watermelon to tourists and the other stand that sells watermelon to tourists, is The Music Man who provides free tunes to anybody within a 50-mile radius of his unbelievably loud mouth. As a Music Man, you will never receive an instrument or any other device that creates noise in any form. Your job of "Music Man" will consist of you producing the most horrible sounds possible from your mouth while strumming an air guitar and clenching your eyes shut tighter than a vacuum sealed pressure chamber. This provides hours of entertainment to people who would like to hear contemporary versions of unidentifiable popular classics screeched through a mouth with less than seven teeth combined. Don't worry if you do not know how certain unimportant parts of the tunes go, such as the "chorus" or "entire song"; simply launch into an impromptu "DAHH DEEE WAAAAHHHHH OUUUUGGGHH" and strum harder on that imaginary guitar that exists only in your mind.

PROS: Women are attracted to musicians; the crazy homeless ladies will be jumping all over you in no time.
CONS: The cops like to hear the pleasant resonating "THUD" noise from connecting their nightsticks with Music Mens' skulls.

As blockbuster movies like "Pearl Harbor" and "Ernest Goes to Camp" have demonstrated, tales of military action and wartime bravado are very popular with Americans and various other residential members of the United States. Why not cash in on this profitable trend by becoming Stabby Stan, the psychotic World War-whatever veteran who has gone from fighting for his country to fighting for nickels? The position of Stabby Stan requires an applicant who has the ability to change the pitch and volume of their voice every other word while wildly gesticulating as if they're trying to flag down passing UFOs. You must be able to detail your somewhat fictional wartime stories in the following coherent fashion: 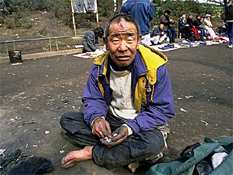 Want to break into the industry but don't have the skills to relate fictional war stories or classic vocal masterpieces? Choose the job of Mr. Mumbler, the crazy homeless person who takes every chunk of the English language, crams it into a verbal blender, and spits out the failed results! Your job will require you to mumble in the general direction of people who pass by, aliens who can't be seen by anybody other than you, and to yourself when everybody else has fled in abject terror. Lacking any eyeballs or clothing is a big bonus, as they simply keep you from doing your job, which consists of the the following:

YOU: (Adopting a very concerned and serious look on your face, as if you were single-handedly solving the entire school violence problem) "BLOOBBOEBALABRBRLABR. MORGA MORGA HRM. CHARGUWEAERRRRL? GRAAAG!"

Repeat for fifteen hours or until your remaining tooth falls out, whichever comes first. Hopefully the act of spitting bile at passing people will be involved somewhere in the process.

PROS: Out of the three crazy homeless positions, this one is definitely the easiest to handle. It's a "gateway" homeless position, which will some day lead to "harder" and more "intense" homeless positions.
CONS: You have to wear the same plaid flannel shirt each and every day until it decomposes to roughly nine shirt atoms which cling off your filthy right shoulder blade.

I hope one of these three crazy homeless Seattle positions appeals to you in your quest to find employment in this fair city. As mentioned before, the benefits and options for this particular job are limitless; you're only held back by your own creativity and alcohol tolerance. Get out and start a promising career as a crazy homeless person, it's a job ANYBODY can do, unlike being a webmaster. I hear you have to have all kinds of goofy licenses and formal training to do that. I graduated from the University of Geocities! I majored in "Enabling the Community!"

Ed Baker... Be a Better Christian!

Ed Baker's Christian Decision comic is back with a brand new tract to get you in a Jesus-worshipping mood! That's right, Ed Baker and his devout Christian buddy Bob James have teamed up to produce "The Sin of the Americas," the newest education-packed religious comic. Get ready for a God blessed good time!

Head on over and get your worship on now!