Hello fellow awful people! It's once again time to take a look at the events that make up our world, or the world that makes up our events, or the days of our lives, or whatever the hell I was originally trying to write before I hit the fifth beer.

Jerusalem Does What Palestinians Can't; Kill Israelis - At least 15 people were killed and more than 200 injured when a four-story wedding hall collapsed in southeast Jerusalem Thursday night. Police said the collapse appeared to be caused by a structural failure and was not the result of a terrorist act. Witnesses did not report hearing an explosion.

Of course I'd hate to make a cheap joke based off human death, pain, and suffering, but this news item is simply too important to pass up. Also I'm kind of an idiot and these kinds of tasteless articles are the only crap I know how to write short of 120-page dissertations on why I want to buy a robot monkey bartender. Besides, this site is named "Something Awful," so you knew full well what you were getting yourself into when you clicked the link to come here. Don't blame me - blame society. Nah, society doesn't run a half-assed, moronic webpage. Blame me.

So anyway, a wedding hall has finally been able to do what the Palestinians have been unable to do for decades and decades; kill a fair amount of their religious and basketball rivals, the highly Jewish Israelis. Now I'm not ashamed to admit that I'm sick to death about reading article after article after article detailing how a Palestinian suicide dynamite truck full of missiles and Carnation Instant Breakfast blew up an Israeli coffeehouse and slightly injured an 80-year old woman. Every day I check CNN.com, I'm instantly greeted by news concerning how either the stock market is doing something unpredictably predictable or how the continuing, non-stop war in the Middle East is continuing to be nonstop. I'll actually go out on a limb here and claim that I'm more tired of this Middle East fiasco than the actual men and women in Jerusalem who are currently dodging bullets and checking their tuna casserole for antipersonnel mines. Why? Because I'm an American and it's my God-given right to ignorantly shriek about whatever inane little thing annoys me at the moment. Also I run a highly unsuccessful webpage which I use to transparently vent my frustrations over the fact that I haven't had sex since the Carter administration. But these minor issues are both beside the point; the real news article lies in the fact that for once A WHOLE LOT of people have been killed in the Middle East. 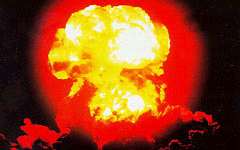 "A nuclear bomb detonated in downtown Palestine today, injuring two people and slightly damaging a hat store."Now I have never proclaimed myself to be an expert on war and violence, but I strongly believe that my exhaustive background of watching action films and playing Quake has made me an expert on war and violence. For example, I know for a fact that when you throw a hand grenade into an enemy stronghold, at least nine of them will be blown up while nine more are forced to jump in slow motion away from the explosion. When you shoot a missile at an enemy compound, the entire place detonates from various exotic camera angles. When you drop a bomb on enemy territory, there is a five-second delay at which point your arch-nemesis looks up at your helicopter in horror. Then you smugly state, "checkmate, motherfucker" and wave an American flag while smoking a genuine American Cuban cigar as everything combusts in a fiery inferno of destruction and all objects within a 50-mile radius are turned into twisted, smoldering lumps of ruthenium or whatever the hell stuff is made out of these days. You'll notice that the common element linking all these scenarios together is the presence of death (and lots of it). When something blows up, people die; that's the purpose behind 99.9% of exploding objects in today's society. However, the armies in the Middle East don't seem to be aware of this. They continually launch ballistic missiles at each other on an hourly basis, yet the amount of deadly weapons used never seems to justify the scarce amount of casualties. A few examples for your consideration:

Palestinian military sources say Israeli helicopters fired on targets in two West Bank towns on Saturday - No injuries have been reported following an attack on the headquarters of Palestinian leader Yasser Arafat's elite bodyguard in Jenin.

Israeli gunship attack kills two - Palestinian sources said the man was one of two Palestinians killed in an attack by Israeli helicopter gunships in the West Bank town of Jenin.

Three bombings rock Mideast - Israel Radio reported that a car bomb had gone off near the town's market and two people were injured.

As you can plainly see, conventional weapons of destruction simply aren't working in the Middle East. Gunship attacks, helicopter assaults, and fiery bombings are a daily occurrance in the Middle East, yet all we have here is a grand total of two deaths and two injuries? That's really sad. Perhaps the Palestinians and Israelis could learn a few lessons from Lt. Colonel Grossman and maybe buy some RTS combat murder simulation games? After all, Yasser Arafat leading a Zerg rush across Gaza would not only be effective, but it would also be something that CNN would pay millions of dollars to obtain footage of. I know I would. That silly hat Yasser wears is worth the price alone, much less the image of him riding a herd of creatures who are spitting acid at opposing women and children.

So, in summary, the Israeli Wedding Chapel of Death seems to be the only entity in the entire Middle East that is skilled at knocking off large amounts of people. I'm not saying that this is a bad or good thing (mainly because I don't want to read moronic email comparing me to Hitler, or even worse, Stile), I'm just saying that while missiles and bombs and trick dog poop are failing to kill highly religious people in the Middle East, wedding chapels are. Either Pakistan / Israel should start buying more copies of "Blowing up Civilians: For Dummies" books, or they should begin building enemy wedding halls across the enemy's country. Don't ask me though; I just run a failed website and drink beer. Plus I don't care.

We at Something Awful have recently realized that our cutting-edge content and intellectually stimulating news updates simply aren't educational enough to satisfy the teeming masses of Internet citizens who demand to learn while they brainstorm ways to Goatse.cx their nephew. As always, we have "stepped up to the plate" and "scored an extra point" of justice while performing a "hat trick" of good will for the public. That's right - we're proud to present the first educational Something Awful movie, "Kitty Learns to Count," courtesy of Dante Passera. Head on over right now and learn a little something about life, about love, and hopefully... just hopefully... a little something about yourself.