Does this scare you? What if I told you it was REALLY HIGH UP?I was watching the History Channel today and as usual I started thinking about something completely unrelated to "The Complete Story of the Green Berets". Sure a bunch of footage of guys blowing open doors and shooting cut-outs of Abraham Lincoln holding a gun to a baby's head is neat, but my mind tends to wander after they double tap Honest Abe for the fifth time. Nearly everyone has phobias, you need one to fit in. To be hip you've got to be afraid of something. Phobias can be fairly low key, for example; I often check the back seat of my car when I get in it to make sure a sex-crazed female rapist doesn't jump out and attack me before I can pop in a breath mint. I also have an overpowering urge to check every chamber to make sure I didn't put two bullets in my revolver when I'm playing Russian Roulette.

My generalizations based on my own psychotic behavior led me to the internet, which I rationalized is such a source of fetish information that it must also be a repository for phobia insight. I loaded up my favorite Christian search engine and quickly discovered a number of sites that detailed the terrors that haunt various celebrities. In addition to being a scaredy-cat, I am also a celebrity gossip fan, so I am reproducing several of the more eye-catching ones here for you. I was surprised to see R-Lo listed as a celebrity; I guess it's hard to regard someone as one when you've seen them staggering around blind drunk with their pants around their ankles and a shirt-load of vomit while shrieking like an Arab woman. Come to think of it, I first saw that video on cable, so maybe he is a celebrity after all.

Rich "Lowtax" Kyanka
Fear: Lowtax is afraid of money.
Behavior: Rich flees from money whenever possible. He knowingly seeks out failed business ventures, quits jobs before he gets his first paycheck and tears up all his mail in the fear that it might be a card with money in it. In 1993, Rich actually faked his own death to avoid receiving a paycheck from the grocery store where he was employed.
Source of Phobia: When he was thirteen years old Lowtax was out sailing with his parents and his ship was attacked by reverse pirates. Rich and his family were forced at rapier-point to unload millions in gold bullion from the pirate vessel and onto their ship while being called things like "cur" and "scallywag". He never recovered. 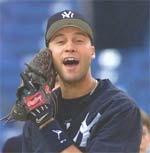 To prevent Derek Smart from straining his "lawyer muscle" here is a picture of Derek Jeter.Derek Smart
Fear: Derek Smart is afraid that people will realize that he is not intelligent.
Behavior: Born Marcus Warren, he attempted to change his name to Captain Smart in 1994. After the change of name was rejected for using a rank, he decided upon his current pseudonym. Derek constantly overcompensates for his lack of intelligence by proclaiming himself the smartest man alive. To prevent any loss of self-confidence he has covered his room with mirrors with "Nobel Prize Winner" stenciled on the bottom. He has also recorded himself impersonating Albert Einstein saying "Derek, you are even smarter than me," and plays this to the rare visitors to his home. They nod politely and pretend to believe him.
Source of Phobia: With so many childhood events that could possibly be the cause of this phobia, it is difficult to select just one. The most probable event was when, at age nine, Derek was eliminated from an oral spelling competition for spelling the word "cat" as "C-5-J".

Clifford "Cliffy B" Blezinski
Fear: Vampires
Behavior: Always wary of vampire attacks, Cliffy B attempts to ward them off with gypsy medallions and brightly colored costumes. Since most vampires are also gamer geeks whose skin has been caressed to somewhere near translucent by the glaring cathode rays of their monitors, Cliffy hopes to forever trap them in their basements by constructing confusing Unreal levels.
Source of Phobia: Cliffy B was told by gypsy fortuneteller Level Lord that unless he bought some gypsy trinkets he would be killed by vampires. While Cliffy did not initially believe this, Level Lord mesmerized him with his patented "hypnostare" and implanted regressed memories of vampire attacks.

The "Where's the Beef?" Lady
Fear: Beef
Behavior: She is dead. Her intense fear of beef was posthumously justified in 1994 when DNA analysis determined that she was brutally gunned down by a steer. The killer is still on the loose.
Source of Phobia: The "Where's the Beef?" Lady grew up on the mean streets of Fort Worth, Texas. There she learned to both respect and fear the power of beef, as marauding groups of bovines perpetrated numerous acts of violence in a gang war that lasted decades. It was ironic that her terror-stricken question became a pitch for the very product she feared. 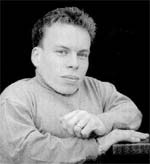 Forever typecast as an Ewok or a Leprechaun.Warwick "Willow" Davis
Fear: Ron Howard
Behavior: Warwick Davis makes his home in the catacombs beneath an ancient monastery in an effort to elude the dread gaze of Howard and his necromantic minions. His constant effort to be joined in his stronghold by Val Kilmer, who he believes to be master swordsman Madmartigan, has landed him in the hoosegow more than a few times. Seventeen times to be exact.
Source of Phobia: While on the set of Willow, Ron Howard pursued Davis relentlessly between takes, screeching and throwing empty bottles of scotch at him. On the final day of shooting Howard tied Davis into a canoe, lit it on fire and set it adrift in the English Channel.

It's good to know that these celebrities have some of the same fears that we normal people do, it really humanizes them in a way that even a zip disk full of poorly-faked nudes never could. Hmmm, now where was that video clip I downloaded using Kazaa of Warwick Davis having sex with a recycling bin? Haha, there it is, that crazy little shit head.