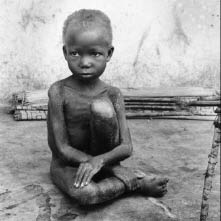 Little Joey may not live much longer if you don't act.Just when I thought the people who frequent the Internet were beginning to wise up and show some signs of savvy, I read the touching tale of "Kaycee." Kaycee was a very special nineteen year old girl who had Leukemia. She eventually decided that she just couldn't compete anymore in this workaday world and opted to die. This is all quite touching and emotional except for one small fact; she never existed and was simply a hoax much like the hundreds of other tired hoaxes created by lazy webmasters and forum goers across the Internet. Somehow people keep falling for these things over and over again. Then it hit me; SA has its very own fake kid with a horrible disease who may die at any minute and desperately needs your support! Maybe we could somehow hook Little Joey up to the Internet and milk him like an ebola-addled cow for all the money he's worth! Even though I just told you that this is all an incredibly elaborate lie, based on current Internet user statistics at least 90% of you will still donate money to save Little Joey. Have a heart and be part of that 90% statistic!

ABOUT LITTLE JOEY: Little Joey was born in the village of Mortega in Peru. His father died when Joey was only three, hit by a bus carrying fancy rich people to a party in Lodeiva, the so called "Golden Paradise" of Peru. His mother Janice was forced to work 75 hours a week in the local laundry steaming factory just to make enough money to buy her children crackers. Not even name brand crackers like Saltines, but instead generic "soda" crackers. The hard labor took its toll on Janice and by the time Joey was ready to go to kindergarten, the entire front of her body had been scalded into a seamless flat surface like what that evil omnipotent kid did to his sister's mouth in "Twilight Zone: The Movie." 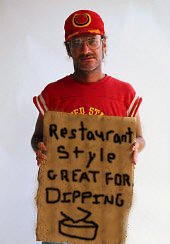 Joey begs on the streets of Atlantic city. Too poor to read or write, his sign is copied from a restaurant.Joey and his three sisters tried to feed their mother with what precious food rocks they could spare, but she was unable to do anything but slide down greased surfaces on her belly and she soon died of starvation. Joey and his sister were evicted from their rubble pile by a very unforgiving landlord and were forced to disappear into the harsh Sahara desert. They were befriended briefly by a talking owl, but a gang of poachers from Los Angeles shot the owl to death for its prized ivory dice eyeballs. Left with nothing but his two sisters and the ability to count cards, Little Joey set off for the heart of the Sahara; Atlantic City. He exchanged one of his sisters for 100 dollars worth of chips and went immediately to the blackjack table. On a 20 he raised his other three sisters in a daring gambit to get them all out of poverty; unfortunately the house had a 21 and his sister - his only remaining blood relative - was sold to the Bristol Flats glue factory.

Penniless, hungry, and alone, Little Joey slept on the streets of Atlantic City, begging what he could from travelers and sometimes robbing the elderly. Don't frown on the way little Joey lived;, he would have robbed the rich and virile, but in his weakened state he was only able to wrestle purses away from women over the age of eighty. While living on the streets, Jacinda Goodlady, a local crackhead doctor, picked the boy up and took her into her crackhead clinic for a routine starving child examination. The tests from his pap smear came back positive: Little Joey had ebola. Miss Goodlady then called for more testing. After weeks of painful prodding and needling, she discovered that in addition to ebola, Little Joey had also contracted AIDS, eye cancer, gonorrhea, gout, rickets, disco fever and the plague. Also leprosy and hat head.

All is not lost. You can help feed and medicate Little Joey by donating to the Little Joey fund. This charitable contribution can serve as a tax write off and possibly also a business expense if your job happens to be to send money to starving disease-ridden third world urchins. If you would like to send Joey a gift directly instead of making a financial contribution this is also possible. We asked Little Joey what he wants most in this world and he provided us with the following list: 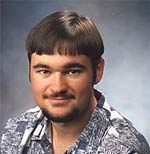 Without your support Joey is doomed.

In this world it is comforting to know that you can affect someone else's life in a positive way, and this is your opportunity. Little Joey needs your help. Without it he will die horribly, blood spraying like a firehose from every orifice of his body as he curses your name. Open your hearts and your pocket books to Little Joey.

Everyone's favorite insane canine superhero, Taco the Wonder Dog, has done it again. I can't really explain what "it" is, much like that thing Lawrence Fishburn was going on about you just have to see it for yourself.

A NEW AMINATION'1111111 I am USRE YUOARE BUBBLING WIHT HAPIENESSS!!!!1 IT SI TEH CONTIEUED AVENTURES OFTAOC TE OWNDER DOG AND CHARLTON HESTON1!!!! SEE IT MY FRENDS TODAY BEFORE THE DAY GOES AWAY AND THE HAY BECAOMES TO GAY

As usual I have no idea what exactly is transpiring in this flash animation, but it is entertaining as hell. There is also an added bonus in the form of an MP3 track performed with SA alum Fragmaster.