A Brief History of Skull Island 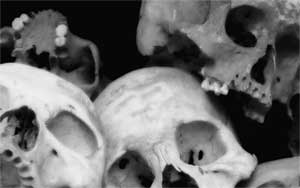 The captain observed the distant landmass through his trusty spyglass. It was dark, but the silhouette of the island stood out from the surrounding sea and cut a jagged hole in the night sky that blackened out the stars.

"Skull's Island!" He cried out. "We're naming that island after me -- Captain Skull."

The next morning, at the break of dawn, the explorers set foot on Skull's Island for the first time. It was October 17, 1830.

By sheer coincidence, the entire island was completely covered in human skulls. The explorers were amazed at the staggering number of skulls stretching out for miles before them, and also that there was no evidence of any native life. If ever there was any life on Skull's Island, it had long since been buried.

"A grim sight loomed before us," wrote Captain Skull in his journal. "As awe-inspiring as horrifying, here is Death's personal chest-of-drawers, the terrible trophy case where he keeps his most precious treasure: millions of human skulls."

So entranced by the novelty of a skull-covered island, Captain Skull decided almost immediately to establish a permanent settlement. Skull Town he named it, after himself. The modest population of 32 men began at once the daunting task of making room for the gestating community.

They started by moving skulls out of a particularly promising section of the island's inland, piling them up on top of some skulls in a nearby area. The work seemed fruitless at first, as the skulls were piled at least 15 feet deep in places. 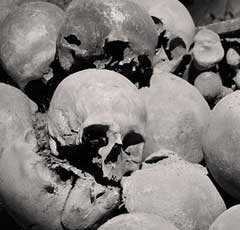 After days of work, and with the hot tropical sun beating down mercilessly, the men had finally reached soil. In doing so, they had walled themselves in on all sides. The men had built a prison for themselves - a prison with skulls instead of bars.

Cut off from the few men that remained aboard Captain Skull's ship, Skull Town had no resources to sustain itself. Eventually the men of Skull Town turned to organized crime to supplement their incomes and food rations, and, finally, hair-pulling and cannibalism.

There would be no escape for the settlers of Skull's Island. With the settlement of Skull Town a failure, Captain Skull made one last entry in his journal on November 15, 1830. "All these skulls... soon we will be lost among them."

True to his word, the settlers of Skull Island died, with their bodies and skulls disappearing into the already massive collection of skulls. Skull's journal survived, conveniently preserved inside a particularly hardy skull, of which there were many... too many, perhaps.