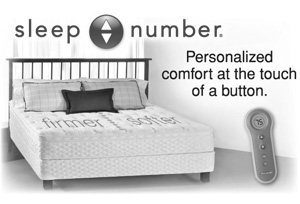 "Mattress delivery!" said the man on the other side of the door. I did not believe him, for we had only fantasized of a mattress, and yet, with an easy payment plan, affordable even for my salary as a part time digger of miserable holes, a man of devilish countenance from the Sleep Number store - Ted as I recall was his name (for it was inscribed upon his covering all) - had brought over a new mattress.

It looked, at first, like any other mattress as he set it upon the time-worn frame of our bed.

"This," said Ted, holding up a queer device, "is your Sleep Number control system."

The instructions were deceptively simple. I, requiring a certain firmness, would adjust the dial to the number of my choosing and find the DualAir technology activating within the mattress to create my desired rock-like texture. My wife, desiring a different outcome, could utilize this system to achieve a mushy, gelatin-like goo bed to cradle the disease-eaten oatmeal of her bones.

As suddenly as he had appeared (for it was very sudden) Ted had disappeared from our house, leaving a great quantity of illustrated instructions in shockingly vivid color and a silvered mirror disc which was supposedly filled with images on how to operate the bed, although its secrets could not be revealed upon our phonograph player.

That very night, exhausted from crossing the room several times and speaking more than a sentence, my wife and I retired to our new bed. It was then that I made that fateful setting! If only I had known what I was doing as I dialed in 95 as my Sleep Number! If only my beloved wife Esther had not the jellied shoulder blades of a leper!

Woe fills me as I recall her Sleep Number (for it was 15) and how she smiled with contentment as she nearly disappeared into the softness of her side of the mattress. We were so happy! It was the only moment of happiness in our lives other than the one time she gave birth and the child did not immediately die (although he died soon after) and we felt at ease. 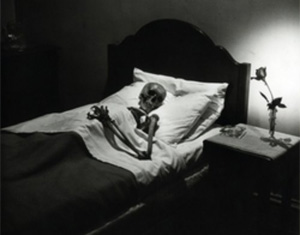 If only - looking back - I had known I would not have drank that glass of water earlier. But we cannot change time! I did drink it! I did get out of the bed and go to relieve myself! And Esther, dearest Esther, sweet soft-backed Esther, did roll upon my side of the bed!

I heard a sound - I still hear it now - like a cookie being tossed from atop a cathedral onto the square below. She looked at me with wide eyes for a moment and then she was done in by the agonizing pain of the hard mattress. I had no choice but to bury her beneath the floor boards inside a secret room, walled up so that no rats or ravens can get at her.

You think I lie? Go, now, tear up the floorboards! Look in the bedroom! You will find the bed, still set to 95, and my wife, like a jigsaw come apart! Tear it up, please, I beg of you, and rid me of this guilt. Better still, give me your pistol or a poison cup, so that I might be done with my sorrowful existence like so much trash being fed to orphans. For until I die I will see that terrible number glowing in the night.

My Sleep Number, the number of Esther's eternal sleep, 95.