Smudge the Hate - Part One 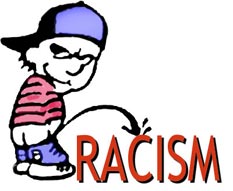 WELL THAT SURE SOLVES THAT PROBLEM. THANKS!For decades or maybe even whatever is bigger than decades much of mankind has struggled to live in a utopia of equality. Despite these efforts to transform societies around the globe the world remains a festering sore of hatred, or at least slight prejudice. A lack of respect and a seething distrust of other races is almost expected of most people these days. This owes more to tradition than anything, as stereotypes and slurs pile up, one on top of the other, to provide racists and homophobes with more ammunition. It's too easy to fling these barbs out, and because there is the slightest hint of truth to many of them they wound much more than if they were wholly unfounded. White guys just might not be able to dance as well as people of other races. Black people just might like fried chicken a little more than other races. Eskimos just, uh, might…fly…horses to…moons of…eh! Fucking Skimos, never givin' a guy a break.

I realize that Something Awful can't do a lot to change the world of race relations, but I think there is something we can do to lend a very small helping hand. We need to dilute the stereotypes. Drown the slurs in a sea of new and entirely nonsensical epithets. You may insult or enrage an Asian person by yelling "hey Chink!" at them, but if you yell "hey Mister Fix-It!" at them chances are all you will do is confuse them slightly. More importantly if any racists are watching you'll confuse them too. Racists are almost invariably "going with the flow". If they see some people yelling random nonsense at minorities they are going to imitate this idiotic behavior. Before you know it you'll have the drunken racists who drive around on Saturdays in a beat up Camaro screaming "Go back to Cloud City you damned Launch Tubes" at a family of Puerto Ricans.

If you're not following my logic let me put it another way; the tables will be turned! 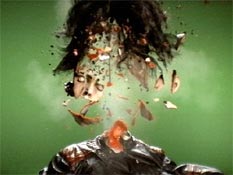 Sweet Tarts claim another victim.Current Status: Caucasians, or "white folk", are generally the least susceptible to racial bigotry, although resentment from minorities has created a few lackluster attempts at slurs and stereotypes for whites. Since no white people read Something Awful I'll go ahead and get the Caucasians out of the way. Their current stereotypes center on their inability to be "hip" and "with it". Racial slurs run the gamut from the fairly impotent "cracker" or "white bread" to the spooky and mysterious "ghost face". Relatively affluent adult white men are known collectively as "The Man" for their ability to keep people, meaning non-white males, down. I guess this qualifies as a racial slur too although I'm not really a doctor of raciology.

If a white person eats a Sweet Tart they perish instantly.

There is a race of super-whites called "Mirrors" that are so white you can see yourself in them. If two mirrors stand next to each other they die. If you take a picture of one then you die.

If a parakeet dies in its cage it is because a white person is nearby. Coal miners used to use parakeets to detect white leaks in Caucasian-rich veins of bauxite.

White people are really bad at holding their breath for extended periods.

If you hear a church bell ring it means that a white person has lost a tooth.

When a white person drinks a dark beer they become black, but only for 24 hours. This experience is also very painful to them and they usually avoid it unless on a "covert op".

If you see a white person with a lot of hair on their body that means they are the king white person.

The Talk of the Town (only elderly white women)

What Got Into That Cat ("Friskies" is also acceptable) 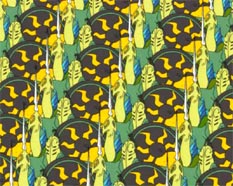 Oh great, they've formed their six-eyed insect army again.Current Status: One of the most racially discriminated against groups; African Americans have a long legacy of oppression and prejudicial treatment and have a tough road to hoe even in this liberal day and age. Popular stereotypes range from "they like fried chicken and watermelons" to "they are all criminals and rapists". There is a general fear of young black men in today's society, a fear that is reinforced by the news media's heavy reporting of any black crimes. As with most stereotyping there are a few positive stereotypes for black people, including "they have giant penises" and "they are really good at sports". Despite the preponderance of stereotypes related to African Americans there is plenty of room for more! Fake stereotypes about them will help to confuse racists and muddle the current stereotypical representation of African Americans.

Black women control the men, or "worker drones", by secreting a pheromone from a special gland in their thorax.

If you are touching a black man when the song "Under the Boardwalk" plays on the radio then you are legally married to that man regardless of your sex.

African Americans cannot cross moving water and must retire to a box containing the soil of their homeland when sleeping.

Black people will pass out if they see a helicopter. Even seeing one on TV or in a photograph makes them dizzy.

Black people can disguise themselves as inanimate objects by using an innate shape-shifting ability. If you spot one and call out his or her true name then they will grant you three wishes.

Ghoulies (applies only to a group) 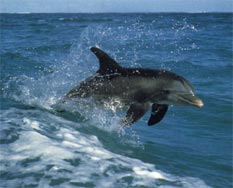 It's a boy!Current Status: There are as many stereotypes for Asians as there are different sub-groups of "Asian". Whether you're calling Vietnamese people "Gooks" or Koreans "Zipper Heads", you're being a fucking asshole and it needs to stop. I suggest you sign up for my new stereotypes and slurs for Asians.

If Chinese people have sex with Japanese people they give birth to dolphins.

When Koreans fall asleep their arms detach from their bodies and molest a certain particular type of land tortoise.

Instead of the righteous Christian God people from Thailand believe in a giant magical baby called "Tormentorion" that rides a horse made out of hope.

When a Japanese person dies they flash for ten seconds and then reappear as a larger and red version of themselves with twice as much health.

All Asians are made out of dough and baked into life inside the "World Oven".

Vietnamese people have fleshy sacs concealed against their back that will fill with air when they feel threatened.

The Chinese calendar is a joke played on Westerners and Chinese New Years celebrations are actually covers for cabals of Chinese wizards to gather and eat white babies.

Death Breath (Reserved for the Japanese Makers of "Kid Nikki")

Take these new stereotypes into consideration before you and your friends load up on cans of Steel Reserve and spray paint and head out to the house where the interloping family that isn't your ethnicity lives. You can humiliate yourself and everyone can have a good laugh at your inept vandalism when you write "World's Greatest Grandpa" on their house in red spray paint. Friday I will return with three more ethnic groups that deserve to have their racial slurs diluted with a mind numbing tornado of nonsense. Until that time, or at least until I choke back the bile and manage to play through another Hentai game, I bid you adieu!

Jedidiah "Unbelievably Fake Sounding First Name" Kirchner has suffered through another horrible Nintendo game for your amusement. This time the method of his suffering was a wonderful light-gun game entitled "Baby Boomer".

A prototype milk-powered cyborg baby has escaped from a government research facility at the local park. As our best sniper, you must prevent this technology from falling into the hands of communist insects and skeletons that want to destroy the American way of life. If you are killed in this deadly crawling rampage, the U.S. government will disavow any knowledge of your embarassingly stupid mission

It sure sounds like quite a caper folks! Browse your way on into the poorly concealed trap that is the ROM Pit and check out Mr. Jedidiah's review!