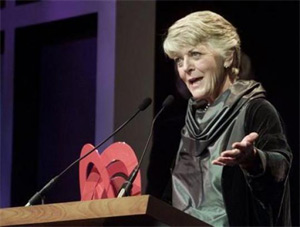 Clinton says goodbye to Geraldine, but America's big dumb nightmare continues. Geraldine Ferraro's biography is a catalog of very modest strides on behalf of women. She was one of two women graduating from her class in law school. She was elected as a New York congresswoman in 1978. Not the first, but there weren't all that many. She was the first woman to serve in the lofty role of Secretary to the House Democratic Caucus, long a dream of women everywhere.

"Sweetie, when you grow up," women no doubt told their daughters, "you too could be the Secretary of the House Democratic Caucus just like Geraldine Ferraro."

"Mom," the little girl no doubt replied, "when I grow up I want to be the secretary of the astronauts and firemen!"

If it's 1983 and you're a feminist you might be able to squint hard enough to view Ferraro as some sort of icon for women. As opposed to viewing her as, say, a middling New York congressional representative who did nothing remarkable during five years spent in the House of Representatives.

All that changed in 1984 when Ferraro had the good fortune to be selected as Walter Mondale's Vice Presidential candidate. At the time many wondered aloud, "Why pick a woman?" and also "Who the fuck is Geraldine Ferraro?" The nation continued to wonder this until November of that year, when America forgot about both her and Mondale and reelected Ronald Reagan with something like 99.8% of the vote. Ferraro would later admit that being tapped for VP had little to do with her career and more to do with her womb.

Feminists kept right on squinting. In 1994 Ferraro was enshrined in the National Women's Hall of Fame, possibly with a plaque under her photograph describing some of the milestone achievements of her career. 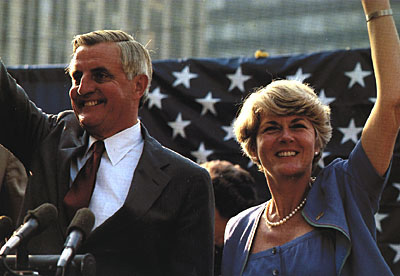 
Ferraro was picked to run alongside Walter Mondale in 1984 as a gamble to swing women voters. Their ticket was defeated in one of the most lopsided presidential victories in American history.

Ferraro attempted and failed to win a Senate seat in 1985 and 1992. Since then she has been bouncing around like tumbleweed through charitable boards, think tanks, and various Washington consulting firms. She appeared briefly in headlines in 1998 when she was diagnosed with cancer, but the media quickly lost interest in her moderately heroic fight when Ferraro managed to avoid death.

Then came 2006. Ferraro endorsed New York Senator Hillary Clinton in her bid for the Democratic nomination for President. Quietly, like a wizened snake, Ferraro slithered aboard Clinton's campaign baggage train. Ferraro campaigned with Clinton, did a little surrogate work, but mostly remained behind the scenes helping to raise money as an unpaid member of Clinton's finance committee.

That is, until this week, when Ferraro burst forth from the underbrush to regurgitate the partially-digested skeleton of race at a fund raiser. Her bizarre comments were subsequently picked up and printed by an obscure California newspaper.