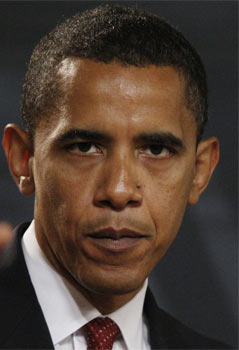 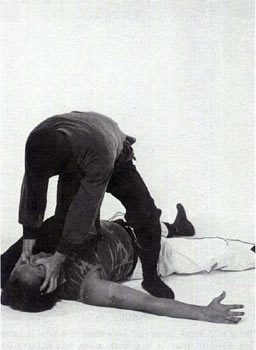 I know I am not supposed to threaten the president so secret service dudes be aware this isn't a threat this is just a hypothetical discussion of advanced ninjitsu techniques for the sake of education. Now that I said that this dude is seriously torquing my nards. I didn't have time to vote on election day, but I was gonna vote for him because I thought it would be cool to have a black dude as president. Besides, things sucked really bad in the economy and wars and stuff. It was time for change.

Then like months and months go by and guess what? All that stuff is worse! Yeah, he talks a good game. I heard we were leaving one of the wars, but where are the troops? I don't see them doing any victory parades. And the economy, forget it. That things is done. It's all over. That isn't change I can trust in.

This dude is a major screw up, so if I were hypothetically engaged in a ninja duel with him I would have to use a Sai Lung takedown followed by the Double Thumb Gouge. Grabbing both ears with my fingertips I will use the Invisible Fists of the Ninja to rip the cheeks and ears completely off my unwary foe. Blood will spray all over the place and he will scream and reach up and grab his face while blood squirts out from between his fingers.

Should have fixed the economy before it was too late I will laugh and turn and walk away. He will survive. Maybe he'll even get his ears back through some surgery or some sort of stem cell stuff using fetuses or whatever. He will be horribly disfigured by huge scars though. Scars to remember me by. Maybe next time he will fix the economy before he tries to ninja duel the likes of me.

Hey, okay, that's all of the people I am mad at right now. I mean, there are definitely others, but you don't know those guys. Brian Coslo, forget him. Andy Clement? I would take him apart using the most basic moves. He would be defeated by Tai Chi and old fat ladies do that at the Curves in the strip mall by my house.

So, I hope you enjoyed the article. It was fun thinking about using my years of hard training for justice. Remember, never seek a fight, but if a fight should find you then be prepared with the greatest weapon: knowledge. Of karate.