The Pentagon needs your / our / no help!

Thursday, the Pentagon sent out a statement that urged all citizens to "send in bright ideas on thwarting terrorism." This is quite unusual to say the least, and will probably result in at least a couple letters from brain-baked hippies which say something to the effect of "make love not war, man, and just ask the terrorist dudes nicely to stop and they'll turn down their stereo or whatever your problem is with them are wow this is the best tasting stamp I've ever licked legalize weed!" 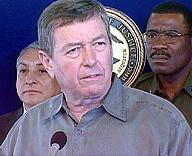 John "Cancer Man" Ashcroft wants to hear your pie in the sky schemes!

I find this slightly disturbing. Isn't the government supposed to have a solution for anything? They've got all those super-intelligent aliens locked up in New Mexico they can consult with and all, right? And a couple of weeks ago it was reported that government agencies were meeting with Hollywood bigshots to try to brainstorm ideas for fighting terrorists, but my guess is that all their suggestions involved adding more car chases and giving Osama Bin Laden a sexy, wise-cracking female love interest.

But the government is apparently so darn befuddled by these terrorists that they've got to ask the lowest common denominator - the American Public - for help. Quite the sorry state of affairs! But I'm willing to do my part to help my country, so here's a few of my "gnarly" solutions to the Pentagon's three most "radical" problems.

Sonic The Hedgehog once sang "there is no circumstance that you can't handle (when you use your mind)" He also stated, "if you've got to do something (you've GOTTA do something!) Believe in yourself! Yourself!" So the solution to defeating these difficult targets is to just try your best and think positive! Come on, you can do it U.S.A.!

Passing out gold stars and buttons that say, "I am a winner!" may also help.

This is a toughie. Afghanistan is not the most geographically pleasant country in the world and features a whole bunch of mountains, caves, deep valleys, and wild terrain. Kinda like a Tribes level. Foreign troops that have set foot in Afghanistan in the past quickly discovered how hard it is to navigate and survive in such conditions, especially when pitted against people who have adapted to such an environment. 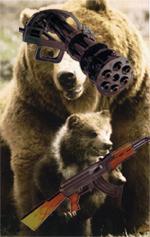 So obviously your typical American soldier is going to have problems shooting up Afghan's for extended periods of time, especially if he has to climb up mountains and stumble around dark caves. However, there is one type of American that is well suited to fighting in such environments. With just a little weapons training they can be molded into an unstoppable Taliban thrashin' fighting force.

I am, of course, talking about bears.

All bears (outside of the wussy ones who were dumb enough to get captured by the zoos) spend all their life in the wild, stealing picnic baskets and performing a variety of other covert operations. They don't mind mountains, and they've already spent gobs of time exploring and frolicking about in caves. They're big, tough, hard to kill, and your average uneducated Taliban has probably has never seen one before and would thus be scared shitless. Yes, elite squads of attack bears are the perfect weapons to deploy in this particular situation. As an added bonus, they'll leave big stinky surprises in the woods!

Regrettably, there is one potential flaw to my otherwise brilliant proposal: with the Afghan winter fast approaching, U.S. attack bears may heed the call of nature and start hibernating in the very same caves they were assigned to search. So we'll have to supply them with Red Bull or some junk to make sure they stay awake.

During the cold war, America's brilliant strategy was this: if Russia launched nukes at us, we would launch nukes at them. That way, basically everybody in the world would die instead of just Americans. It's like the time I was losing a game of checkers so I just "accidentally" pushed the board off the table, threw my chair through a window, punched somebody's Mom in the nose and ran away. Everybody lost, but at least the other guy didn't win. You know?

So my solution is to challenge the Taliban to a game of checkers and if they lose that have to promise not to use any weapons of mass destruction.

Oh wait! Has anyone tried mailing Osama Bin Laden like a card that says he won $500 million dollars and three nuclear missiles, which he could claim by stepping into a giant cage near the border of Pakistan? It's worth a try! Believe in yourself!

Half-Life: Uplink stars Jaz Meadows, an ambitious reporter who breaks into Black Mesa and acts like a prick while talking to a gender-shifting woman named Bill on his headset (you know, like Counter-Strike).

Valve Software, who released Half-Life, their first and only commercial game approximately fifteen years ago, sent out this email to a whole bunch of gaming sites yesterday:

Back in its prime, I was quite the Half-Life freak. I ran the biggest fan site around and also regrettably wrote probably the most popular and disturbing serialized piece of fan fiction, "Walter's World," which chronicled the increasingly more bizarre and psychotic adventures of an under-sexed Black Mesa Biochemist. So I think it's safe to say that I'm disgusting, pathetic, ugly, bespectacled nerd-ass loser with no life because I actually wrote like 200 pages of fan fiction. Holy hell, that's sad!

Valve wants you to forget that they've already made one attempt at producing a Half-Life movie. The result, "Half-Life: Uplink," was so bad that they blocked its release. I, however, have seen the five-minute long string of vomit held together by MPEG compression and I can honestly say that it's one of the worst things ever. Like most game to movie conversions, it's only very loosely based on the subject matter. The main character of the short film isn't even Gordon Freeman, it's a smirking, retarded British reporter named Jaz Meadows. He spends most of the movie climbing up a ladder to escape from an invisible alien while supposedly dead marines blink at the camera.

Let's face it, even if a Half-Life movie manages to get made, a bunch of stuff is going to get lost in the translation and it'll probably be pretty terrible. As things stand right now, the most successful and entertaining video game to film conversion is probably "Mortal Kombat," and that's not exactly a momentous achievement, is it? Even if Valve writes the script themselves, the studio that picks up the rights will mangle the concept beyond belief with poor casting and inexplicable subplots involving a cute, scrappy little kid.

With the aid of my crystal pokeball, I have looked into the future and procured the press kit for 2004's "Half-Life: The Movie."

After losing the role of "Duke Nukem" to buddy Matt Damon, Ben signed on to play Black Mesa researcher and alien ass-kicker Gordon Freeman because "Half-Life and Duke Nukem are both videogames so it'll be basically the same." While the videogame incarnation of Gordon Freeman didn't utter a single word, his big screen counterpart will have plenty to say to the invading aliens. "Gordon may be a scientist," says Affleck, "But he's got a sense of humor. In this one scene I kill a zombie scientist and say 'Looks like somebody needs their morning coffee!' It's really funny!" Ben hopes to bring his signature style and grace - showcased to its fullest in "Pearl Harbor" - to the Half-Life project.

While the version of Barney the helpful security guard in the videogame was loosely based on Don Knotts, the motion picture incarnation of the character adds a few shapely curves to the mix. "American Pie's" Shannon Elizabeth plays the sultry French security guard sidekick. "Betty is tough, yet seductive," says Elizabeth. "I don't want to give anything away, but Gordon Freeman is going to need all the help he can get in the bowels… of Black Mesa. The sparks will be flying in more ways than one!" Half-Life director Paul "Starship Troopers" Verhoeven also notes that "While the… aliens may have destroyed the inter-dimensional laser, the showers are still working and perhaps Betty and Gordon will have time to take a break from saving the world?"

In a casting coup, "Big Momma's House" superstar Martin Lawrence is Walter Bennett, the wacky black Black Mesa scientist who's constantly finding himself in zany situations. "Wally's always got somethin' on his mind and somethin' to say, know what I'm sayin'?" says Lawrence. "Being cooped up in his lab and all can drive a brotha crazy, believe you me. He's gonna get freaky with some of them fine alien bitches. I mean, daaaaaaaamn!" Daaaaaaaamnn, indeed! Walter also helps Gordon build gadgets and weapons to fight the forces of Xen, including the devastating dung launcher.

Former Limp Bizkit frontman Fred Durst, hot off his portrayal of Mr. T in last summer's "A-Team" remake, plays Garg, leader of the alien resistance. "Garg is full of rage, man, he's there to fuck humans up." Durst explains. "Back on his home planet he gets no play so he's taking it out on these humans. He's going to take their jobs and shove it, you know? It's payback time. He's mad as hell and he's not going to take it anymore, MOTHA FUCKAH!!!!!"

David Duchovny is the mysterious G-Man, a shadowy individual who is probably up to no good! Is he a high-level government agent? Is he an alien himself? What conspiracies is he trying to hide? "It's really nice to get another role in yet another production that involves aliens and government conspiracies," Duchovny said. "Yeah, real great. You would think after suffering through years of that garbage on the 'X-Files,' I'd be really sick of it. People say that I'm typecast… but… err… it's… hey, have you seen my wife? She's really hot! You jealous?"

Being patriotic is great and all, but not everybody is Hacksaw Jim Duggan. So when ones entertainment scratch needs itching, pretentious folks such as I like to shun American-made cinematic offerings like "Half-Life" to partake in the viewing of films made in other, less sticky countries.

Since most of us don't have the time to watch a three hour Kurosawa epic or the intestinal fortitude to suffer through a lushly photographed French film about the best and quickest way to surrender, I've whipped up A Foreign Film that was made in another country. Just watch it and you'll suddenly become a lot more cultured. You'll still smell strange, though.