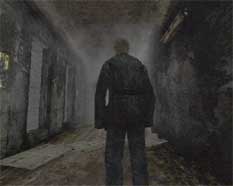 A screenshot from Silent Hill 2. Notice the gritty noise filter that the game uses.

As many of you more stalker-esque people out there are aware of, I recently purchased the game Silent Hill 2 for the Playstation 2. Silent Hill 2 is the sequel to the award-winning game, "Silent Hill 3," a title that many claimed made it the king of the "survival horror" genre, beating out other popular games such as:

In a rare, surprising turn of events, I actually managed to play Silent Hill 2 throughout the weekend and put in enough time to solve the game. This is remarkably odd because Silent Hill 2 was the first game I played the entire way through since Ikari Warriors 2 on the Nintendo, and I'm not even sure I managed to defeat that game. Actually, now that I think about it, I'm fairly sure I just knocked myself out after throwing the cartridge against the wall and watching it ricochet back into my face. My dreams of defeating Ikari Warriors 2 were simply the result of my brain diverting my body's attention from the fact that I was losing gallons of blood at an alarming rate. That's fine by me since bleeding to death presents itself as a much more pleasant option than actually having to play Ikari Warriors 2, a game which (if I remember correctly) was about using magic pool sticks to beat on drunk aliens and floating alien pinball machines. Actually, I think the game made less sense then that. So I don't really know where the hell I was going with this story, but the main point I was trying to get across was that I never have enough patience or a sufficient attention span to solve any games, even if they involve floating alien pinball machines. 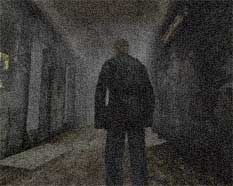 A screenshot from Silent Hill 2. Notice the gritty noise filter that our site uses.

While Silent Hill 2 did not feature such pixellated wonders, it did provide gritty, incredible graphics. The shading / lighting system is simply remarkable, casting realistic and completely believable shadows throughout the game. Although there aren't too many different enemies in the game, the monsters are some of the most creative and original creatures I've ever seen. They're accompanied by some really chilling sound effects that will undoubtedly rattle you through a surround sound speaker setup. I definitely enjoyed this game and would give it a great rating... if it wasn't a survival horror game.

Now some of you out there might be saying, "but Rich 'Lowtax' Kyanka! You can't give Silent Hill 2 a bad review just because it's a survival horror game! My and my buddies who spend all day worshipping Capcom and Konami are going to send you a barrage of furious emails, many of which have a back background and black text!" That's fine by me; all my email get automatically forwarded to every employee who works for About.com's spam mailing lists. A link labeled "click here to unsubscribe" is included on the bottom of each message, but it simply sends them to this URL (WARNING: DO NOT EVER, EVER, EVER CLICK THAT. EVER).

1. Stupid, stupid, stupid puzzles. The puzzles in survival horror games never make a bit of goddamn sense and they simply revolve around using bizarre, moon-man logic to find items which don't belong in whatever scenario you're in. They are so far from being realistic that they embody anti-realism, causing the surrounding 30 foot radius around your television to morph into some bizarre alternate dimension of nonsense. For example, let's contrast problem-solving skills between survival horror games and real life:

PROBLEM: You are supposed to meet somebody inside an abandoned church, but the front door is locked.
SURVIVAL HORROR SOLUTION: You must find three different coins: the Coin of Jealousy, the Coin of Anger, and the Coin of Poison Resistance +5, then place them in a demonic piggybank that is found in the basement of a nearby haunted fallout shelter. Then a piece of paper will come out of the piggybank's mouth, revealing the location of the Back Door Key. Once you get the Back Door Key and enter through the back of the church, you will have to find the Storeroom Key which leads to the Closet Key which holds the Attic Key which contains the Ladies Bathroom Key that hides the West Wing Hallway Key that is used to store the Front Door Key. By the time you actually get to the Front Door Key, it's the next morning and the door has already been unlocked.
REAL LIFE SOLUTION: You go home and watch "Married With Children" reruns and fall asleep on the couch. The next morning, if you're not too hung over, you go to the church and see if the door is still unlocked.

PROBLEM: There is an AM radio at the bottom of a well that you must get.
SURVIVAL HORROR SOLUTION: First you must enter the mortuary and step on the correct sequence of headstones to open the Gargoyle Head door. Inside the Mummy Catacombs is the "Jeweled Box of Infinite Mystery and a Little Bit of Confusion," which you must unlock by using the code you stole from Nursemaid Henkin's pocket when she passed out from drinking the spiked Coca-Cola you got from the Arab Stewardess who attacked you after entered the Hall of Hogs that was southwest of Alf Village. I don't remember how you end up getting a radio, but this is at least a good first step.
REAL LIFE SOLUTION: You say "fuck it," drive to Radio Shack to purchase a new one, and get in a car accident on the way home. 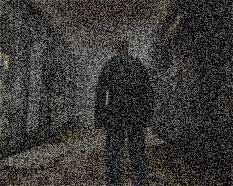 A screenshot from Silent Hill 2. I think there were just a bunch of ants on the screen here.

Every single retarded survival horror puzzle revolves around you finding keys or using coins to find keys or pushing a correct sequence of buttons that lets you find coins that you redeem for keys or valuable parting gifts. You could be trapped in a closet and the only way to escape involves you combining a horseshoe and a Richard Nixon campaign button to fashion a crude, coin-shaped key. I loathe survival horror puzzles and the anti-logic which they revolve around.

2. People who look human but definitely aren't. Okay, I'm well aware that people in Japan act different than Americans do. For example, when they buy pants, they usually ask for a much smaller waist size than most of us could fit into. However, survival horror characters don't act even vaguely human. Every single cutscene and plot device seems as if they were written by robots trying to emulate aliens trying to emulate human beings.

SITUATION: You are surrounded by zombies who want to kill you and do horrible things to your corpse. You run into a mysterious abandoned gas station, where you meet the owner, a burly man equipped with a shotgun and a seemingly infinite number of shotgun rounds. He is the only person in the entire world who is not dead.
SURVIVAL HORROR OUTCOME: The owner and you decide it would be better if you "split up" for no reason whatsoever.
REAL LIFE OUTCOME: You and the gas station owner combine your firepower and mow down as many zombies as possible. You are then arrested and both charged with homicide, since the zombies were simply gas station customers and both you and the gas station owner were hallucinating from spending the last 30 minutes shooting up heroin in the bathroom.

SITUATION: You meet an eight-year old girl hiding in a closet of a hotel that's haunted by ghosts / aliens / monster / demons / pirates.
SURVIVAL HORROR OUTCOME: The girl and you decide it would be better if you "split up" for no reason whatsoever.
REAL LIFE OUTCOME: The girl gets sexually molested by tentacles that break out of the floor. This appears to happen very frequently in Japan.

A screenshot from Silent Hill 2, ported to Atari 2600.

3. Doors that defy all laws of physics. I've never understood how this works in games.

SITUATION: The fire escape door that leads to the third floor is jammed.
SURVIVAL HORROR OUTCOME: You speak to a janitor who tells you the story about how the owner of the haunted hotel went crazy and murdered a bunch of people and buried them under the floor and made a delicious gravy from their eyeball juice. Then, after his stupid story, the door is magically unjammed.
REAL LIFE OUTCOME: The janitor mumbles something to you and walks away. Door is still jammed. Door continues to be jammed for all eternity. You die alone and afraid.

SITUATION: You're trying to leave a building, but you keep saying out loud, "it seems as if I'm forgetting something..." and you find yourself unable to run out of the building.
SURVIVAL HORROR OUTCOME: You obviously forgot to pick up the 4-pixel wide items in one of the 500 different rooms.
REAL LIFE OUTCOME: You say, "fuck no I didn't forget nothing" and you leave the building. You are then arrested for indecent exposure, since the item you forgot was pants.