Mostly A’s – Leonardo Child
By answering mostly A’s, your child shows a clear propensity for giving orders and seeing that they are followed through. These skills come in handy in jobs such as gym teacher, Arby’s supervisor, or as one of the many nameless, faceless men who operate bogs Bob Crane may have died in. But don’t quit your job and enroll your child in any cutthroat business schools just yet; all of this leadership comes at a price: personality. Your small, (and our statistics indicate) pink, boring child will become a large, pink boring adult. If it’s any consolation, the cycle will continue and in 20 years you will get to see the same small, pink boring children once again. 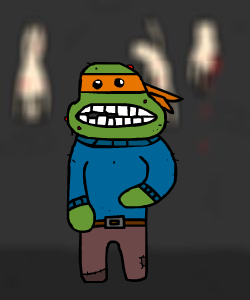 Mostly B’s – Donatello Child
I know what you’re thinking: with a dust machine like that, my child will make me millions! You dumb, lyric-mishearing motherfucker. First of all, just what the hell is a dust machine? Does it create dust? Pick it up? Yeah, you don’t know. Retard quiz part two: Just how the hell are you going to make money off of a dust machine? Christ, I’m surprised you weren’t so frightened by the sound of two sets of genitals slapping together that you couldn’t finish making your little overalled debt farm!

Note: if you did not mishear the “does machines” lyric in the official psychiatric evaluation theme song, we regret to inform you that your child will be smart, but a social cripple. On the plus side, he’ll get a whole page in the yearbook before he graduates!

Famous Donatello Children: Steven Hawking, Ric Ocasek, Mr Coffee(there has to be a real one probably)

Mostly C’s – Raphael Child
Are you familiar with the Buddy character from Charles in Charge? Of course you are! That sitcom set the world on fire and may just eclipse M*A*S*H in terms of sheer popularity! Anyhow, Charleseseses friend Buddy is always ready with a wisecrack for just about any occasion, and a loud shirt to punctuate the hilarity. Your child fits neatly into this role. But unfortunately for you, people like Buddy are murdered in their own homes every day by kind-hearted family members just looking for silence. In a world without laugh tracks and breaks for Wilford Brimley oatmeal commercials, we have a name for people like Buddy: assholes. Your only hope is to hide or destroy all in-house Garfield books and inform your child as to why Peter Venkman’s attitude makes him the worst possible Ghostbuster.

Mostly D’s – Michelangelo Child
You poor, sick son of a bitch. Was the pregnant mother of this child around paint fumes? Did she spend the entire gestation period in a paint factory located next to a sulfur processing plant? Was she inseminated with a filthy trowel? This is the most logical path to take in the creation of a Michelangelo Child. The only advice we have is to sit back and enjoy the ride- like Space Mountain but with constant bail payments. As your child grows more lazy, slothful, and crimey, he or she will no doubt try to strangle you with a rusty guitar string in the middle of the night. And if you survive the attack - and the hepatitis it will no doubt inflict – you’ll be able to look your child straight in the eye and think, “My little baby is growing up” and “Oh my god no a gun I don’t want to die not here not yet!!!”