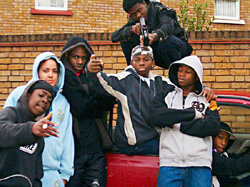 Hey! You know those words you spraypainted on my shed? My nephew told me what they mean!When it comes to high school football, a certain amount of rowdiness is not only expected; it's encouraged. Taunting the opposing side? Sure. Throttling the young lady at the concession stand when she shortchanges you on relish yet again? Go for it. Following the referee home with your headlights off so you can gut his dog and hang it from the patio under the cover of darkness? Well, let's just say I've got a little nickname around these parts.

But for as much as I like to have a good time, I have absolutely no patience for certain activities -- and I believe Vinton and Duke would agree with me on this one. So, 18 years ago, what should extinguish my team spirit than a group of "urban" teens who had somehow wandered onto our beloved bleachers (Go Colonels!) because I assume they had mistaken this pure slice of Americana for one of their rap parties where they planned on trading food stamps for smack drugs and ethnic hair products. One look at these young men in their big coats and backwards hats told me they were up to no good, so me and the boys listened in on their conversations. Apparently each one of these "gentlemen" was sired by a particularly promiscuous "mama," and much talk and laughter was had as the men planned out which one of these "mamas" they would sexually penetrate later that night in explicit detail, often with grand exaggerations.

When we addressed the young men, if only to plead for a moment of silence, we were mocked for both our moral fiber and the color of our skin -- looks like your lessons of tolerance didn't sink in, Dr. King. Before their hate crimes could escalate further, Vinton and Duke punched two of the men in the base of their skulls, leaving the third one to ponder his fate before Duke followed up with his trademark gym sock full of BBs. With two "We're number one!" foam hands attached to my person, I couldn't simply wave for the security officers -- they'd just think I was an overzealous fan! So I stood firmly on the necks of our three assailants -- that way, Vinton and Duke could find the police while I kept the criminal element subdued.

Let's just say I "subdued" these animals into a state of brain death so advanced, they'd be lucky to muster up enough strength to open their mouths without drooling all over themselves. Also, they've been bedridden for the past 20 years. Advantage: Profitt.