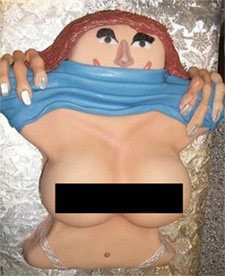 Heh... Never let "Crazy" Uncle Charlie pick out your wedding cake. That rascal!The sad truth about fatherhood is that it's only temporary. After a handful of years, you'll be giving away your princess so some other man can tell her what to do. Still, marriage is important step for your little girl, and the American Dream as a whole... But this "American Dream" quickly escalated into an American Nightmare for members of the Profitt clan and the fine people at Lucky Strikes Bowling Alley.

Being the budget-conscious guy that I am -- my meager savings have been transformed into gold bars which I buried deeply in my basement -- I didn't exactly choose the priciest caterers for Linda's reception. In fact, most of the characters serving up dinner were kind of sketchy, and refused to understand English no matter how loud I bellowed at them.

Before I continue, you have to understand that 9/11 made me very sensitive towards various terrorist plots; in the months that followed America's Saddest Day, I heard rumors that Osama's buddies had planned to blow up several structures vital to the infrastructure of our town: The Rite-Aid, The Fotomat... even our beloved Turtle Pond! So, of course, I understood that the perfect way to undermine American power would be to blow up a civilian wedding -- hell, our boys overseas do it all the time and it really seems to rile them sumbitches up!

So I have my eye on this real shifty guy all night -- never bothered to learn or pronounce his name. While my Linda is dancing with her new husband, I see little Saddam Jr. pull a device from his pocket. Having already conferenced with Duke and Vinton about the subject, all I had to do was make the agreed-upon signal (a peacock call) before they dropped from the rafters, commando-style. We never found out if that cellular phone of his also acted as a detonator, but that would-be wedding hijacker certainly learned what it's like to have 268 pounds of Profitt Power come down on your unconscious skull like a sack of bread dough with a strong work ethic.

As you can see, both my actions and intentions were unmistakably pure. I humbly await your verdict, as do Vinton and Duke, who will be strategically placed outside of your deliberation room, desperately waiting to hear the unmistakable call of a peacock. In closing, let me remind you that the shoes I am currently wearing indeed have cleats on them. The defense rests.