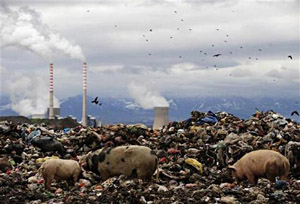 And suddenly, Tooth see clarity: a vision of his past, crystal-clear before him. He remember in 1992, when he involved himself with the affairs of a once-righteous black man who had been corrupted by the evil of the streets. You remember Dynamite Slim?

You mean the librarian? Righteous ol' Dynamite, always posted up in the library teaching kids the supreme alphabet and all that?

Not in those days, brother. Tooth dreamed back, way back to when Slim was a bad man. Back then, Dynamite Slim was deep in the pimp game. And not just any pimp game, god: Dynamite Slim was the city's first overpimp. He was the first pimp to turn out another pimp. His stable of hoes became so magnificent, he craved further challenge, you dig? So one day Dynamite Slim saw a pimp walking down the street, and Slim like, "hey, pimp! You new in town, pimp? You got somebody to take care of you?" And the pimp was just dumbfounded, he like "no, sir, I ain't got nobody, I'm just a simple pimp out here, maybe you could take care of me, sir." And the pimp could feel himself be turned out by Dynamite Slim, but he was powerless to combat it.

So you see, god, not only did Slim have a stable of delectable hoes, he also had six or seven pimps turned out, working under him. Slapped the daylights out of those pimps when they came up short. Grew two, three inches every time he turned out a pimp, too, so by the end of if he was looking damn near seven or eight feet tall. But could such hubris go unchecked forever, I ask thee? You damn right it can't. For the corrupted man inevitably fell victim to his own corruption: Dynamite Slim developed pimp nutt. You ever heard of pimp nutt?

Yeah, cousin. The malady most dreaded among all they who pimp.

Pimp nutt. Symptoms include pimp nutt. You see, the pimping instinct originates in the gonad region. When a pimp pimps too hard, the gonad region can become so overworked that it becomes autonomous. So when Dynamite Slim would go to bed, the pimp nutt in him would wake up and take control of the body, and he'd be walking around the streets like a zombie, turning out bitches in his sleep. But of course he don't know what it is yet-- he wake up all confused, like, "where all these new bitches come from." Went to the best white doctors in the city, god, but they ain't know the first thing about pimp nutt. It's a street disease, and they only up on some white-ass diseases, like fibromyalgia and shit. They can't tell him what up.

So Dynamite Slim know who he gotta go to: if he want to cure a street disease, he must visit the ombudsman of the streets, our boy Tooth Tooth. So he go see Tooth at his manse, which in them days was slightly less stately but a manse nonetheless, and he say, "Tooth, what's wrong with me, you gotta find out why all these new bitches get turned out while I'm asleep." And Tooth says, "Slim, you got pimp nutt. Tell me, what does these bitches look like, the ones who get turned out while you slumber?"

And Slim say, "they all white." And Tooth ask him, "ain't none of them Chinese bitches," and Slim say nah. And Tooth know that the pimp nutt has infected the westmost gonad, because it will tend to turn out occidental bitches, whereas the eastward gonad would naturally turn out bitches of the Chinese persuasion.

And Slim start begging him, "Tooth, you gotta cure this, ain't room in my house for all them, please, Tooth." And Tooth just stand up and say, "Slim, you must accompany me to the pool hall." And Slim be like, "Why I gotta do that, Tooth?" And Tooth Tooth look at him all grave and somber: "because to cure this pimp nutt, Slim, I must beat you at pool."

Slim, being a pimp, did not think it likely that Tooth Tooth could best him at pool, because the order of the universe dictates that a pimp cannot lose at pool, and Slim knew that he was the greatest pimp in the city, and by implication, the greatest pool player. But Tooth Tooth took him to the pool hall, he rack up them balls, hit two in on the break and then blam, blam, blam, blam, one after another. Slim ain't ever even get a chance to touch his stick. Tooth knock them in all in a row, staring at Slim the whole time, never even looking down at the damn table.

And Slim fell then to his knees did lament, "alas, Tooth, the cure is truly worse than the disease."

And from then on, Slim turned all his bitches free, turned his subpimps free, sold his Cadillac. He knew he werent' a pimp no more. Tooth cured him not only his pimp nutt, but the entire vainglorious affect that drove him to the corrupt world of pimping in the first damn place. And from then on, he was righteous. In fact, Slim even went on to beat some other pimps at pool himself, thereby stripping them of they pimpous vanities and driving them toward righteousness.

And Tooth Tooth, in his swine-intoxicated interlude, recalled these events in detail, though he knew not why. And then he awoke, and his mouth taste all nasty like blood and ham and defeat, but he was alive. He was weak, but he survived the night, cousin. The swine hadn't killed him.

And he knew his dream meant something, god. He had become corrupted by swine, and to cure his corruption he knew he gotta strip away all his vanity, all his pride and shit. But he had to find a new way to do it, god, because he knew for damn sure he couldn't beat his own self at pool.

With contribution from and in loving memory of Mark D, the Street Cactus, the late Prince of Falcons. Rest in peace.