The Truth about Josh "Livestock" Boruff 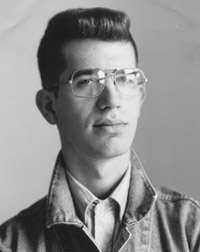 Josh Boruff (only known photograph)To regular readers of this site, Joshua "Livestock" Boruff is a familiar byline; you've probably seen it on dozens of your favorite columns on fur trapping, mars colonization and dogblogging. What's less familiar, however, is the substance of the man. With few exceptions, his articles tend toward the purely fanciful, with his personality and biography obscured by an edifice of fiction; in fact, no other writer in the history of this site has revealed less of his true self.

I count Joshua Boruff as a friend, although I know the feeling is not mutual. At best, he harbors an aloof tolerance of me, and at worst a quiet resentment. Still, through more than five years of social baby steps, I've managed to insinuate myself into his strange, fascinating life. At this point, I feel as though I know him as well as any person ever has, and maybe as well as any person really can. He's an intensely private human being, and I suspect that the publication of this column will put a quick halt to our personal relationship, but the bizarre truth of his existence is so morbidly fascinating that the journalist in me can't hold back any longer--whatever the consequences, the story of "Livestock" Boruff must be told.

Joshua David Boruff is twenty-seven years old. He lives with his mother and, aside from the freelance writing he does for Something Awful, is without visible income.Though we all very much enjoy the hilarious articles he's written for this site, he is entirely without humor in person, and, unless agitated, speaks in a sullen monotone. In fact, I'm almost certain that he has never intended his articles to be funny, and would likely be deeply offended if they're considered as such. 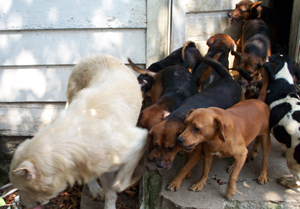 As you may have noticed from his "Barkwire" articles, Josh harbors a fascination with dogs that borders on pathological. His mother's house is filled with his menagerie of large-breed dogs, many of whom must be kept strictly separated due to disputes both real and imagined; for example, Auspice is always kept apart from Satire due to territorial issues that may result in bloody fights, but Kingo is also kept apart from Lothario because Josh thinks their views on Antonio Gramsci's concept of hegemony are dangerously contradictory. I've never managed to take an accurate count of Josh's dogs; he keeps many hidden inside the walls and floors, and I fear I may have double-counted some of his near-identical yellow labs.

Due to his pathological fear of scissors, his mother has to sedate Josh every four months or so to shear off his matted hair and inch-long toenails. His fingernails are to some degree self-policing, as they tend to be ground down during his extensive backyard digging projects. Though he calls them "archeological excavations," he tends to bury more items than he unearths, including his mother's dishes, his shoes, my watch and practically every piece of mail he receives.

Josh hates his own name, and makes a big show of wincing theatrically every time it's spoken aloud. He prefers to be called "Hodg," which he insists is his name backward.

His aversion to scissors also makes his favorite hobby much more time-consuming; he spends hours meticulously tearing articles out of newspapers and tacking them to the walls of his room, rearranging them daily to reflect his perception of the "order of the universe." The stories seem random, with a slight preference to dog news-- a story about a hero dog saving a child; a story about the world's oldest hobo; a story about a city hall meeting being disrupted by a dog; a story about an old man finding a valuable coin. "Properly ordered," he tells me "these stories will create a complete, unified theory of all matter and forces." He spends at least four hours a day adding and removing clippings, reordering them to his satisfaction, and then repeatedly calling the Cambridge physics department and asking to speak with Stephen Hawking.

He often insists that we should "go into business together," although his business plans tend toward the fanciful and the dog-related; one memorable example involved a detailed dog pyramid scheme which would pay off exponentially in dog capital. "We start with just two dogs," he said, "and with just two affiliates operating under us, we'll have four dogs; with seven affiliates, we'll have one hundred and forty-four thousand dogs." 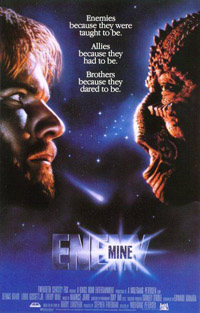 Once, Joshua confessed to me with great shame that he was a "user of pornography," and asked me to dispose of his secret pornography stash before his mother discovered it. I reluctantly agreed, and he handed me a small box to take to the local landfill. Though I swore not to look at its contents, my curiosity got the best of me and I peeked inside; it contained six VHS copies of the 1985 sci-fi film Enemy Mine.

I've never seen him eat any food that didn't come from a tin can. While that in itself sounds ridiculous enough, he's also obsessed with finding foods canned before 1997, when, he says, a "global impurity event" caused all food to become tainted with some sort of unspecified poison or radiation. His mother's basement is stocked with dusty cans, almost none of which have labels; I've often witnessed him grabbing a random, unlabeled can and guzzling down its contents without utensils, not even seeming to notice whether it's congealed chili, pumpkin pie filling or dog food. On the occasions when he's forced to eat recently-canned items, he punctuates his chewing with demonstrative groans and gags as if to convince me that his body is rejecting the tainted food. "It's killing me," he always says; "you're killing me."

Though Josh rarely leaves his house, he occasionally shows up at my doorstep and asks to speak with Eustace, my cat. He believes that cats are merely dogs who haven't fully embraced the tenets of Marxism and are therefore intellectually impure, and he's determined to harangue Eustace with impassioned political monologues until he renounces capitalism and becomes a golden retriever.

Despite his eccentricities, Josh Boruff is not stupid; he's aware that his behavior is socially unacceptable, and will go to great lengths to disguise his true nature. I fully expect him to rebut this article tomorrow and make many false claims about my own character; please be warned in advance that he's a liar, and anything he might say about me will be purely out of spite and insanity.