Something Awful: Ten Years as the New Guy 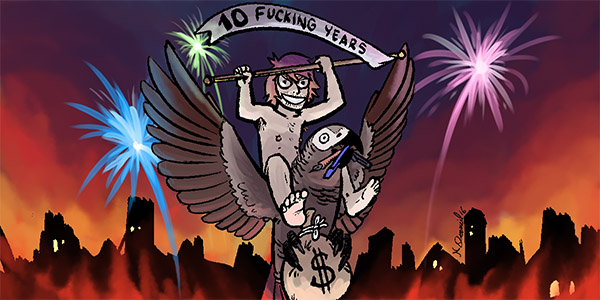 A long time ago, there were these things called "websites," and if you wanted to find something, you would usually go to one. Recipes, episode guides, information on how to build and distribute your own improvised explosives--websites had it all. Today, most of these creations last roughly 18 months before everyone scurries back to Facebook, which gives them the exact same content, but with the added bonus of frequent updates about how racist their family members and hometown friends have become. Back then, "Social media" amounted to the nightmarish HTML sandbox known as "MySpace," and we managed to work up a serious depressive state comparing ourselves to others just fine.

It was in this magical time that I considered myself a big fan of websites. "What's going on with all the websites," I was often overheard saying. And Something Awful in particular captured most of my attention. So, I did what any aspiring writer would do: I ripped off SA's house style liberally for the sake of a college newspaper column which earned the ire of a joyless student body who did not enjoy these so-called "jokes" distracting them from their steady march to the grave. After about a year of this, I had a serious decision to make--one that would alter my life forever. Would I aspire to a practical profession, ensuring a safe and comfortable future, or would I choose to write jokes for the Internet, forever banning myself from any place of employment capable of doing a basic Google search? Hint: I didn't earn a living wage until I was 28.

On January 5, 2006, I began my tenure at Something Awful with this article, which may or may not still be funny. And if you're wondering how someone can possibly achieve the holy rank of "website jokesman," this is what I did: I e-mailed Lowtax. Somehow, he had the faith that I wouldn't completely fuck everything up--or he was drunk at the time and too ashamed to go back on his word--and my reign of every-other-Thursday humor/terror began. I knew I had finally made it when, upon hearing I recently started writing for Something Awful, my then-girlfriend's brother stated, "Great. Now I can never read my favorite website again." Upon gaining my first true hater, I had finally tasted the sour, misshapen fruit of Internet fame. And I slurped that shit down, brother.

At the time, consensus seemed to be that Something Awful stopped being funny right before I started, or, coincidentally, immediately afterwards. In fact, up to this day, people feel it's a totally okay thing to tell me how long it's been since they read Something Awful once they find out I write for it. Because I guess saying "I think what you do is irrelevant and unworthy of my time" isn't as easy to slip into casual conversation. To these people I would formally like to offer a bitter and vindictive "fuck you." I have nothing but respect for all the writers who still do this weird thing we do--this thing only we do--to the point where, 10 years later, I still feel like "the new guy." While I started off awkwardly mashing jokes together, my first few years saw me collaborating with Evan "Pantsfish" Wade and Joseph "Maxnmona" Fink (who now produces the most popular podcast in the universe, a fact I'm not resentful of in any way) who helped me transform my dumb jokes into jokes that are still dumb, but in a smart way. And ten years later, I'm still astonished and intimidated by our current crop of writers, who have no outlet other than Something Awful for their brilliant ideas.

The strange side effect of having written for Something Awful for these past ten years is that I have a public, written record of what I once thought was funny. And while I stand behind most of what I've done, there have been plenty of times I've punched down too hard, or maybe used some words I shouldn't have--like most white dudes in their 20s, it took me a while to stop being a complete shithead. (For the record, I am currently 33 and only 28% shithead.) Granted, this would be the perfect time for me to step down, dust off my hands, and pursue the next great venture. But, as the Internet continues to mutate into some horrifying thing that bears no resemblance to the anti-social entity of my youth, Something Awful exists as an anomaly that gives life to ideas of mine that couldn't even be hammered into the ever-popular listicle format. Even if it's a struggle to get the feedback I once did in the earlier years, I'm still proud to see some dumbass concept I thought up in the shower occupy 800 to 1000 words of space, semi-permanently.

In closing, I wish I had some subversive, punchy ending to cut through this semi-serious stuff, but I'll grant myself the right to be sincere once per decade. So, thanks for reading my work over the years, and feel free to dig through the nearly 300 articles of mine rattling around in the archives. Even if you don't laugh, you'll at least be able to say, "Boy, that guy certainly wrote all this," a statement that's typically kinder than most I've received. So, here's to another ten years of doing whatever you call what I do: Please look forward to another update like this in 2026, but with more information about my porous bones and the state of human-cyborg relations. I can only assume Something Awful will be some sort of eSports site by then.